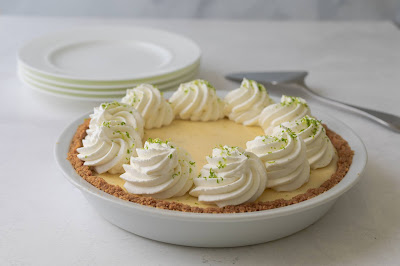 I have a new blog with lots of great new recipes for desserts and baked treats -- just like this delectable Key lime pie -- visit me there at www.pastryathome.com!
Posted by Tish Boyle at 6:16 PM 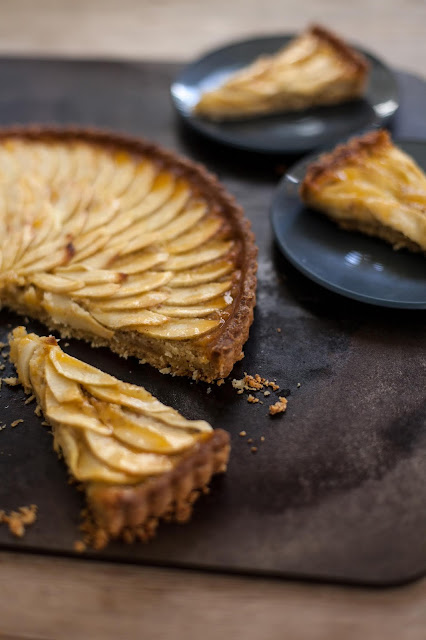 I love this classic French tart. A buttery almond crust is filled with a very almond-y cream filling and then topped off with thin slices of apple crusted with brown sugar. Because it’s made with almonds, the tart dough is a little delicate to work with, but it can easily be patched, if necessary. The apricot glaze, brushed on after baking, makes this tart look like it came straight from a Paris patisserie.

Make the crust:
1. In the bowl of a food processor, pulse the almonds and sugar until the nuts are finely ground. Add the flour and salt and pulse to combine. Add the cold butter cubes and, using a fork, toss them with the flour until they are coated. Pulse the mixture until the butter pieces are about the size of small peas. In a small bowl, stir together the egg yolk and water with a fork. Add the yolk mixture to the processor and pulse until the mixture just starts to come together as a dough. Transfer the dough to a work surface, gather it together and shape it into a 5-inch disc. Wrap the disc in plastic and refrigerate for at least 1 hour before rolling out.
2. Place the unwrapped dough on a work surface that has been lightly dusted with flour. Using a rolling pin, roll the dough out into an 13-inch circle, lifting and rotating the dough often, while dusting the work suface and dough lightly with flour as necessary. Roll the dough up on the rolling pin and unroll it over an 11-inch fluted tart pan with a removable bottom. Gently press the dough onto the bottom and up the sides of the pan. Roll the pin over the top of the pan to trim off the excess dough. Prick the bottom of the tart shell with a fork at ½-inch intervals. Refrigerate the crust for 30 minutes.
3. Preheat the oven to 375°F. Spray the dull side of a 12-inch square of aluminum foil with non-stick cooking spray. Line the tart shell with the foil, dull-side-down, and cover with pie weights or dried beans. Place the tart pan on a baking sheet and bake for 15 minutes. Carefully lift the foil (along with the weights) out of the tart pan and bake the crust for 7 minutes longer, until the crust is just beginning to brown lightly. Leave the oven on. Transfer the tart pan to a wire rack and cool completely.

4. In the bowl of a food processor, process the almonds and 2 tablespoons (25 g/0.88 oz) of the sugar until the nuts are finely ground.


5. In the bowl of an electric mixer fitted with the paddle attachment, mix the butter and the remaining 6 tablespoons (75 g/2.6 oz) sugar together at medium speed until well-combined and smooth, about 2 minutes. Add the ground almonds and mix until combined. Add the eggs one at a time, mixing well after each addition. Add the flour, vanilla extract and salt and mix until combined.

Fill the tart:
6. Spread the Almond Cream into the cooled tart crust in an even layer. Refrigerate the tart while you prepare the apples.

Prepare the apples:
7. Peel and core the apples and cut them in half. Cut each half into ¼-inch slices and place the slices in a medium bowl. Sprinkle the lemon juice over and toss to coat them all over. Add 3 tablespoons (40 g/1.4 oz) of the light brown sugar and toss with the apple slices.
8. Arrange the apple slices in co-centric circles over the Almond Cream in the tart, overlapping the slices slightly and covering the filling. Sprinkle the apples with the remaining 1 tablespoon (13.5 g/0.5 oz) of light brown sugar. Place the tart pan on a baking sheet and bake for 40 to 45 minutes, until the filling and apples are nicely browned. Cool the tart in the pan set on a wire rack for 30 minutes.

Garnish the tart:
9. Place the apricot preserves in a heatproof glass measure and microwave on high power for 30 seconds, or until bubbling. Strain the hot preserves through a fine-mesh sieve into a small bowl. Brush the strained apricot preserves over the top of the tart.
10. Place the sliced almonds in a skillet and cook over medium heat, tossing or stirring frequently, until the almonds are lightly toasted. Cool completely.
11. Sprinkle the top of the tart with the toasted sliced almonds. Serve the tart at room temperature. 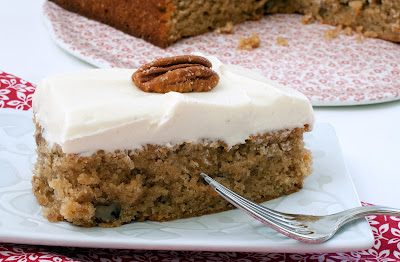 Fall is my favorite time of the year and, having moved to Florida, this is when I miss the Northeast most – the turning of the leaves, the crisp bite in the air, pumpkin-flavored everything and the abundance of apples at the farmers’ market. We still get a decent selection of apples here, but they’re not exactly local, and there’s nowhere 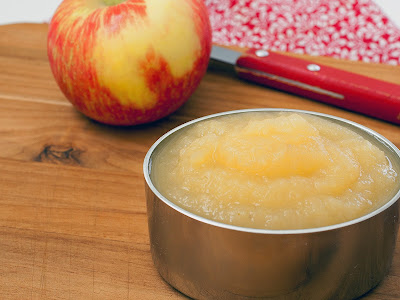 near the variety. But I remain inspired by my memories, and continue to bake up a storm with harvest flavors throughout the season. Currently I’m on an apple kick, as you may have noticed. Here’s one of my favorite fall recipes, a simple, homespun cake made with applesauce (use your own or a good organic jarred one) and 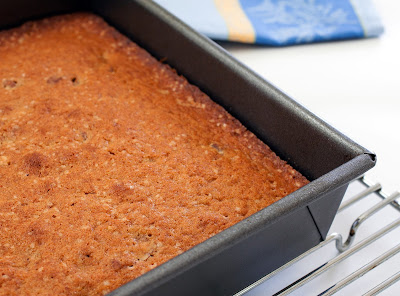 flavored with fall spices – cinnamon, cloves and ginger. I use turbinado instead of white sugar in the cake, and this gives it a slightly coarser texture and a complex flavor with a just a hint of molasses. But it’s the topping that takes the cake – a silky cream cheese and maple frosting and lots of crunchy, sugar-coated pecans. Make 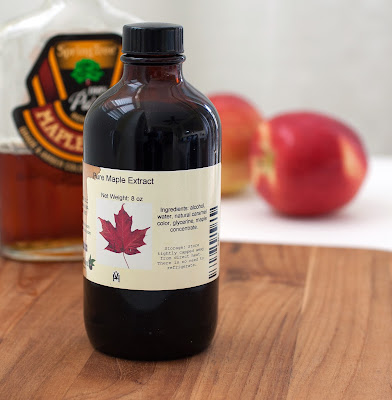 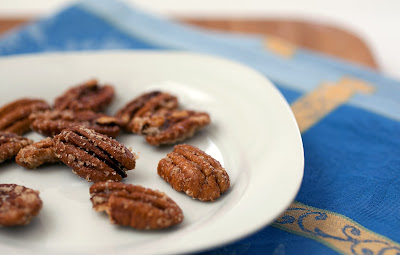 sure to use a pure maple extract -- not that horrible artificial maple "flavoring" that's so frequently used in maple desserts. You can find it in better supermarkets (Whole Foods has it) or on Amazon. For an extra hit of maple, drizzle each slice with a little Grade A pure maple syrup right before serving. 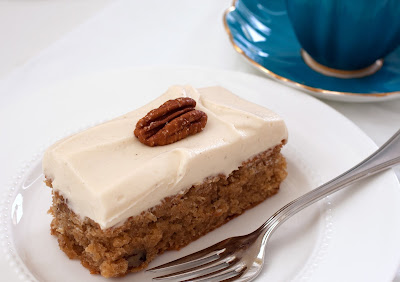 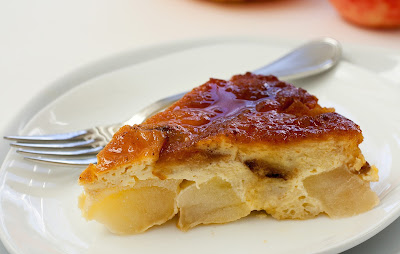 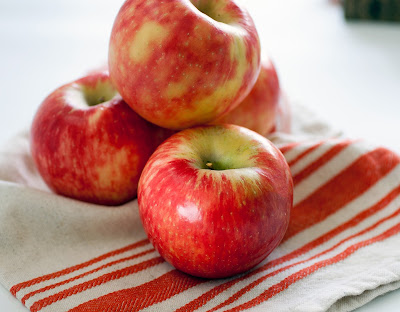 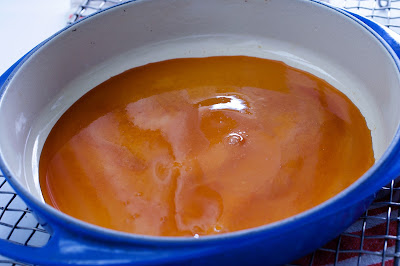 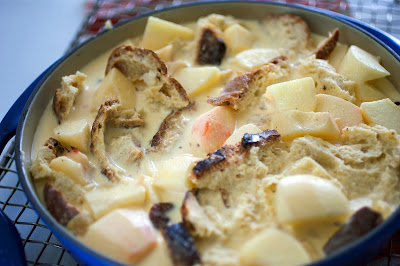 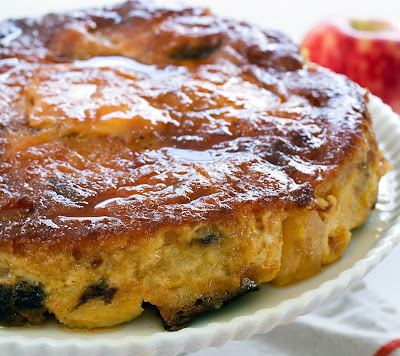 Agresivo (Chili!), Pasta al Forno, and the exiting sounding Punta di Petto di Tè (Brisket Braised in Black Tea). A chapter on Sandwiches, Salads and Condiments is followed by my favorite, Dolci. This includes a panoply of baked goods, from Flourless Triple Chocolate Cookies to Pinolata (Pine Nut Tart) to Lahey’s coveted recipe for panettone. But of all the wondrous recipes in this book, it was the Budino di Mele e Pane (Apple Bread Pudding) that snared me. Jim Lahey says that it took 20 years to perfect it, and I believe him. It is sublime. Use some crusty, homemade bread that’s past its prime – it will make all the difference. I substituted Honeycrisp apples for the Braeburns and served it slightly warm with sweetened whipped cream. Oh my.
Read more »
Posted by Tish Boyle at 6:38 PM