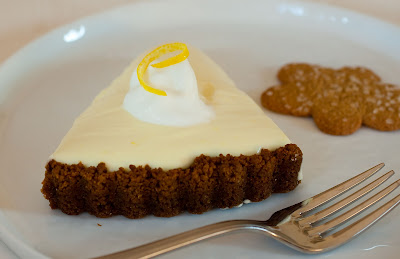 The past couple of weeks have been pretty frantic work-wise, with work over-flowing into my evenings and weekends (and encroaching on my time on the tennis court). Which doesn’t leave a lot of time for blogging, either. I was determined to put up a post 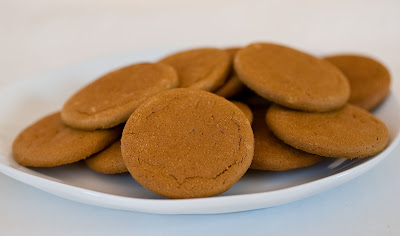 today, though, so I chose to make a super-simple dessert that I love, Lemon Mousse Tart in a Gingersnap Crust. The crust is nothing more than gingersnap crumbs and melted butter, patted into a tart pan and baked for a short time. The mousse is a simple lemon curd 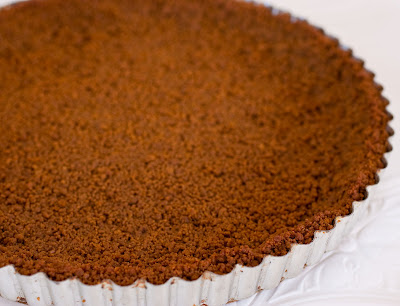 cooked on the stove, chilled, and then combined with whipped cream. The trick to lemon curd is to make sure you cook it long enough so that the yolks thicken, without over-cooking it and causing the mixture to curdle. (If you do over-cook it slightly, any 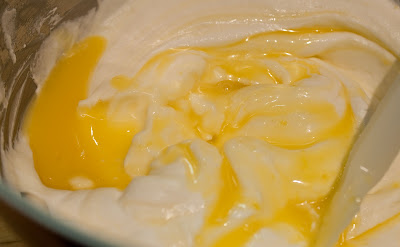 bits of cooked egg should get strained out when you pass the curd through the fine-mesh sieve.) A small amount of gelatin gives the mousse some body and keeps it from falling apart when sliced. I don’t like to add too much though, as the beauty of this mousse, aside from its ease of preparation, is its velvety texture, and gelatin has a way of turning velvet to rubber. 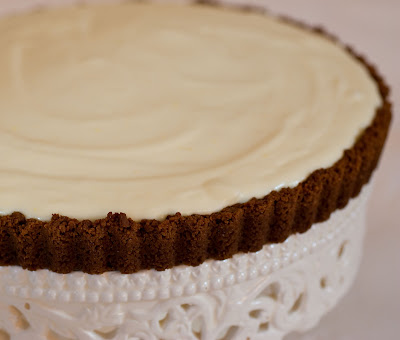 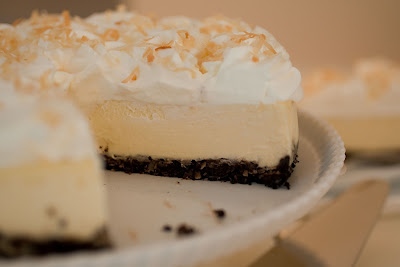 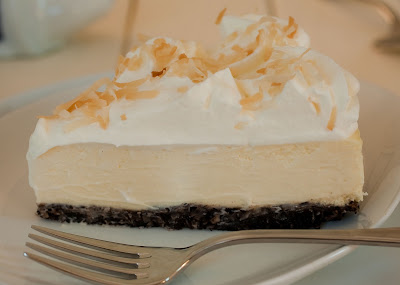 were, and how they still stand up as great desserts today. Many talented people worked on that magazine over the years, including a steady stream of interns, many of whom have gone on to do great things in and out of the food world. One of them, Jules Rosenthal, went on to become a superstar personal trainer, possibly motivated 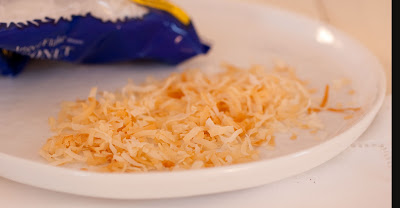 by all the calories she ingested during her time at the magazine. She’s a former caterer who is talented, funny, smart, and, obviously, in great shape. While at Chocolatier, Jules wrote an article on Coconut Cakes, developing some memorable cake recipes, including an outstanding Coconut Cheesecake with a Chocolate 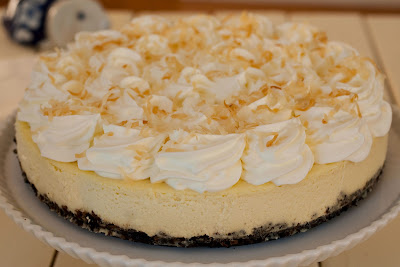 Crust. It’s a rich cheesecake with a whipped cream topping and a chocolate wafer crust. The topping is made by infusing sweetened coconut with heavy cream, straining it, and then whipping it to soft peaks. This step makes this cake extra-coconutty, but it would be equally delicious (and less rich) with plain whipped cream on top. 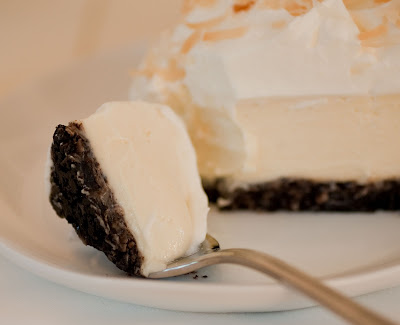 One note on the baking: I baked this cheesecake in a water bath, but instead of wrapping the springform pan in foil as I normally do, I simply placed the 9 ½-inch springform pan into a 10-inch cake pan, and then placed both pans in the water bath. That way the crust will not get soggy, and the cake is still insulated from the direct heat of the oven. Thanks Jules, for this wonderful recipe. And for all the guilt. Time to go work out, I guess… :( 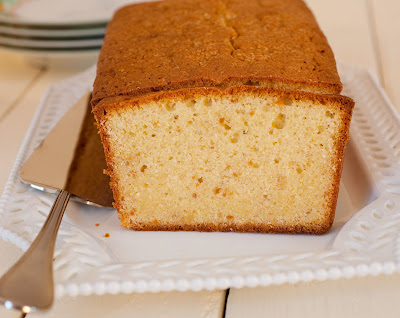 As the editor of Dessert Professional magazine, I spend much of my time focusing on high-end plated desserts, wedding cakes, elaborate pulled sugar garnishes from competitions, and other fanciful creations. It’s so much like the fashion world, this strange little 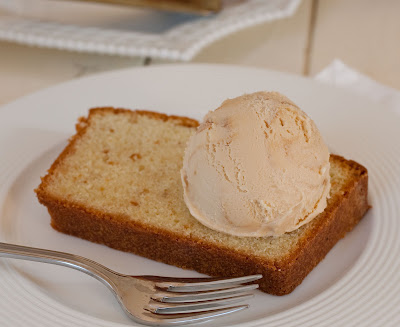 niche of sugar-fueled creativity – to succeed in both industries, one needs a strong foundation of technique and knowledge, a creative flair, and a bunch of talent. I do love this quirky little oeuvre, but being immersed in it also makes me appreciate the simpler side of 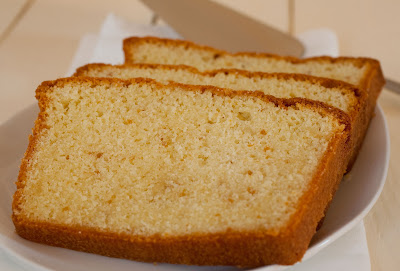 desserts. Pound cake, for example. Rich, moist and delicious, pound cake is refreshingly uncomplicated. It doesn’t require frosting, and icing is optional. If you want to gussy it up, just serve it with ice cream or whipped cream and fresh berries or a berry coulis. It’s an ideal pick-me-up for mid-afternoon, along with a cup of tea or coffee, or toasted as a mid-morning treat (after a bad meeting, for example). Here’s one of my favorite pound cakes, a toasted almond loaf made with almond paste and ground almonds. The recipe is from The Cake Book. 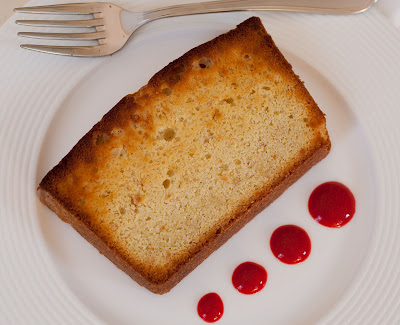 Makes one 9 x 5-inch loaf cake, serving 10
Storage: in an airtight container at room temperature for up to a week or refrigerated for up to 2 weeks.

1. Position a rack in the center of the oven and preheat to 300°F. Grease the bottom and sides of a 9 x 5-inch loaf pan. Dust the pan with flour. Stack two baking sheets on top of one another and set aside. (This will be used to insulate the cake while it is baking – you can use an insulated baking sheet instead.)
2. In a medium bowl, sift together the flour, baking powder, and salt. Whisk to combine.
3. Combine the almonds and 1/4 cup of the sugar in the bowl of a food processor and process until the almonds are just finely ground (don’t overprocess, or the nuts will become oily). Stir the ground almonds into the flour mixture and set aside.
4. In the bowl of an electric mixer, using the paddle attachment, beat the butter and almond paste at medium speed until very creamy, about 2 minutes. Gradually add the remaining 3/4 cup sugar and beat the mixture at high speed until very light, about 4 minutes. Reduce the speed to medium and add the eggs one at a time, beating well after each addition and scraping down the sides of the bowl occasionally. Beat in the vanilla and almond extract. Add the flour mixture at low speed in three additions, alternating it with the heavy cream in two additions. Mix just until the flour is incorporated. Scrape the batter into the prepared pan and smooth the top.
5. Place the cake in the oven on top of the stacked baking sheets. Bake for 70 to 85 minutes, until a cake tester inserted in the center of the cake comes out clean. Place the cake pan on a wire rack and cool for 20 minutes.
6. Unmold the cake and cool completely, right side up. Dust the top of the cake with confectioners’ sugar before serving. 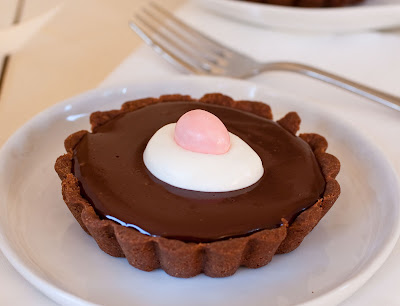 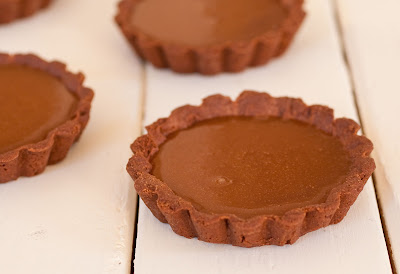 hunting for Easter eggs, and seeing little kids in their brand-new Easter outfits. I remember once, in fact, when my sister told me that she saw the Easter Bunny's tail going out the back door in the 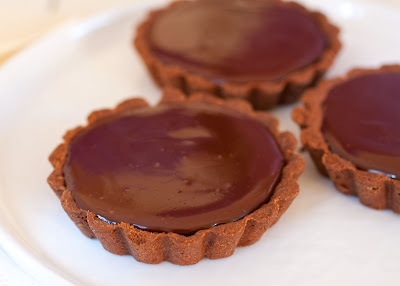 middle of the night. I was so excited I almost fainted.  If I had to pick one flavor combination that transports me to the Easters of my childhood, though, it would have to be chocolate and caramel. It’s 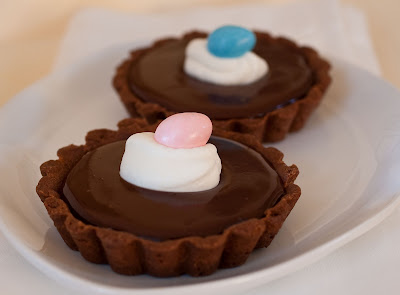 one of my preferred pairings, and I’ve featured it in a few recipes (like this one) on this blog. Here’s another one of my favorite recipes, which comes from Claudia Fleming’s wonderful book, The Last Course (Random House, 2001). Happy Easter to all!!
Recipe notes: I found the tart dough to be a little crumbly and hard to work with, so I added a little cold water to the dough, as directed below. I also found that there was too much caramel 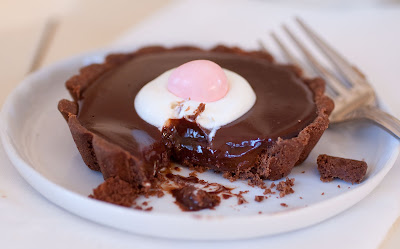 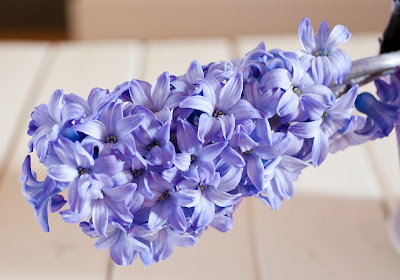