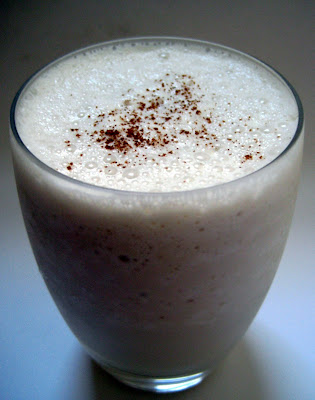 I love Indian food, probably because it’s infused with layers of flavor from so many fragrant spices. So it’s not wonder that one of my favorite teas is a Chai spice blend. Though you can make your own, I order my blend from Upton Tea Imports in Hopkinton, MA. Upton only sells loose teas (teabags are apparently too low-end for them), and I’ve never been disappointed by any of their products—they are exceptional. They even print your name on the tins of teas you order (just in case you forget who you are). The Chai blend is a combination of black tea and the following spices: allspice, black pepper cardamom, cinnamon, cloves, coriander, ginger, mace, star anise, fennel and bay leaf. Chai is traditionally made by simmering tea and spices in highly sweetened milk. When it’s too hot for hot tea, though, I like to make a Chai shake. To do this, I make a strongly brewed tea, chill it, and blend it with vanilla ice cream and some finely chopped crystallized ginger. Though I haven’t tried it, my guess is that this would also work well with frozen yogurt.

Chai Chill
Makes 1 serving
1 tablespoon loose Chai tea or 1 Chai teabag
2/3 cup boiling water
1 cup vanilla ice cream
2 teaspoons finely chopped crystallized ginger
1. Place the tea or teabag in a heatproof cup or mug and add the boiling water. Let steep for 15 minutes. Strain the tea (or remove the bag) and place the cup in the freezer for about 45 minutes, until chilled.
2. Measure out 1/2 cup of the chilled tea concentrate and pour it into a blender jar. Add the ice cream and ginger and process until smooth. Serve immediately.
Posted by Tish Boyle at 7:06 PM