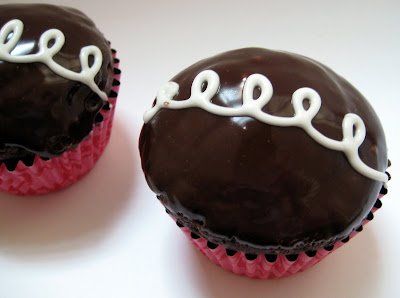 I am proud to say that as a child I had impeccable taste in desserts. Of the pre-packaged, ready-to-eat variety, my #1 favorite was the classic Devil Dog. #2 on the list, however, was that pinnacle of elegance, the chocolate Hostess cupcake, with its characteristic squiggle of white icing across the top. Without the squiggle, it would've been just a chocolate cupcake. But that wave of icing indicated it was a Hostess cupcake, with a cloud of cream filling hidden inside. Superb. Have you tried a Hostess cupcake lately? I hate to say it, but you might be just a little bit disappointed. The iconic snacks of our childhood just don't hold up to our fussy adult standards. Which is why I decided to do my own take on this memorable snack. My version features a chocolate fudge cupcake filled with a basic American-style buttercream. It's topped with an ultra-shiny chocolate glaze, and a signature squiggle of royal icing. The result is much prettier than the machine-made version and, dare I say, tastes a lot better. You can easily double this recipe (you won't have to double the glaze or the Royal Icing). The second time you make them, I guarantee you will. Serve these at your next dinner gathering and you are certain to be the Hostess with the Mostest.

Make the cupcakes:
1. Position rack in center of oven and preheat oven to 350°F. Line a 12-cupcake pan with paper cupcake cups.
2. In a medium bowl, sift together flour, cocoa powder, baking soda and salt. Whisk to blend and set aside.
3. In the bowl of an electric mixer, using the paddle attachment, beat the butter on medium-high speed until creamy, about 30 seconds. Gradually add the sugar and beat at high speed until light, about 3 minutes. Reduce the speed to medium and add the egg, mixing well and scraping down the sides of the bowl as necessary. Mix in the vanilla extract. Reduce the speed to low and add the dry ingredients in three additions, alternating them with the sour cream in two additions and mixing just until blended. Divide the batter among the cupcake cups and bake for 20 to 25 minutes, until a toothpick inserted into center of a cupcake comes out clean. Cool cupcakes in pans set on wire racks for 15 minutes. Remove cupcakes to racks and cool completely.

Make the filling:
4. In an electric mixer, using the paddle attachment, beat the butter at medium speed until creamy, about 1 minute. Gradually add the confectioners’ sugar and beat at high speed until, about 3 minutes. Add the cream and beat for another minute. Scrape the filling into a pastry bag fitted with a 1/4-inch plain or star tip.

Fill the cupcakes:
5. Use a paring knife to cut a small X in the center of the bottom of each cupcake. Hold a cupcake upside-down, letting your fingers rest on the top of the cupcake (which is now the bottom). Poke the pastry tip three-quarters of the way into the cupcake and squeeze in some filling, stopping when you feel a slight pressure on the top of the cupcake. Repeat with the remaining cupcakes. Set the filled cupcakes aside while you make the chocolate glaze.

Make the glaze:
6. Place the chocolate in a medium bowl. Combine the cream and corn syrup in a small saucepan and bring to a boil. Pour over the chocolate and stir until the chocolate is completely melted and the glaze is shiny. Dip the top of each cupcake in the glaze, tapping to remove the excess. Place the cupcakes on a wire rack and let the glaze set for 30 minutes. (You will have some glaze left over. Store it covered, in the refrigerator, for up to a week. The reason you make more than you need is that it’s easier to dip the cupcake in a larger amount.)

Make the Royal Icing Squiggle:
7. Combine all the Royal Icing ingredients in the bowl of an electric mixer. Beat on high for 5 minutes, scraping down the bowl occasionally. Scrape some Royal Icing it into a small parchment cone or a pastry bag fitting with a writing tip. Pipe a row of curlicues horizontally across the center of each cupcake. Serve the cupcakes at room temperature or slightly chilled. They can be stored, covered, in the refrigerator for up to 3 days.
Posted by Tish Boyle at 5:19 PM