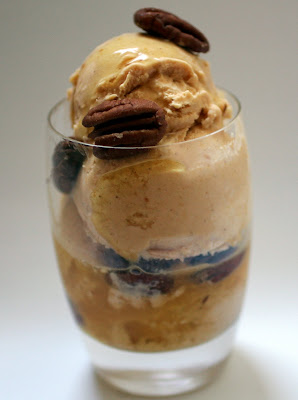 Pumpkin is an extremely versatile vegetable--it works well as the featured ingredient in desserts as well as it does in savory dishes. Which is a good thing, because as much as I love pumpkin pie, it can get a little predictable after a while. Here's a gingery pumpkin ice cream which I paired with a simple bourbon-laced caramel sauce and toasted pecans. You can use fresh pumpkin puree, if you want. Choose smaller pumpkins, which are sweeter than the big ones (but not the very small decorative ones). Cut them in half and remove the strings and seeds. Place them cut side down on a rimmed baking sheet and add about 1/4 inch water to the pan. Cover the pan with foil and bake at 400 degrees F. until tender. Halfway through baking, turn them over and drizzle them with melted butter. Roasted pumpkin is so good this way, you may even decide to skip the ice cream and eat it as is. It also makes the base for excellent soup.

1. In a medium saucepan, bring combine milk, cream, brown sugar, gingerroot, cinnamon and salt and bring to a gentle boil over medium heat, stirring to dissolve the sugar. Remove from heat.

2. Place yolks in medium bowl and whisk in granulated sugar until well blended. Whisk about one-third of the hot cream mixture into the yolk mixture. Pour this mixture into the remaining cream mixture in the saucepan. Cook over medium heat, stirring constantly with a wooden spoon, until the mixture thickens enough to leave a path in the back of the sauce-coated spoon when you drag your finger across it. The mixture should register 175°F on an instant-read thermometer. Strain the mixture through a fine-mesh sieve into a medium bowl and whisk in the pumpkin puree. Set the bowl containing the ice cream base in a large mixing bowl filled one-third of the way with ice water (be careful that the water doesn’t splash into the pumpkin mixture). Stir the mixture frequently until it is chilled, about 25 minutes.

3. Remove the bowl from the ice bath and stir in the vanilla extract. Pour the base into an ice cream machine and process according to the manufacturer’s instructions. Pack the ice cream into an airtight container and freeze for at least 4 hours, until firm.

4. Fill a cup with water and place a pastry brush in it (this will be used for washing down the sides of the pan to prevent crystallization). In a clean, heavy-bottomed 2-quart saucepan, stir together the sugar, ¼ cup of the water, and the lemon juice. Place the saucepan over medium-high heat and cook, occasionally washing down the sides of the pan to wash away sugar crystals, until the mixture starts to color around the edges. Gently swirl the pan to ensure that the sugar caramelizes evenly. Continue to cook until the sugar turns deep amber. Remove the pan from the heat and whisk in the remaining ½ cup water (careful, it will bubble up!), the bourbon and salt until smooth. Let cool until just warm and add the pecans. Serve warm over ice cream.