I went to cooking school in Paris in the mid-80's, and I have great memories of that time in my life. I frequently think of one of our French chef instructors, Claude, who had strong opinions about food and was quite funny. He hated cinnamon, and referred to it disparagingly as "that American spice." Not sure where he came up with that idea (it's native to Sri Lanka, for Pete's sake), but I'm happy to be associated with such a lofty and fragrant ingredient. Cinnamon is a wonderful holiday flavor, so I decided to make a Cinnamon Gelato to go with sweet oven-roasted pears for dessert recently. For the gelato, I simply took a plain gelato base and infused the milk with eight cinnamon sticks—the sticks have more flavor than powdered cinnamon and won’t turn the gelato a muddy brown color. The gelato remains cream-colored, so the intense cinnamon flavor is a real surprise when it hits your tongue. Paired with roasted pears or apples, it makes a simple, elegant and very flavorful winter dessert. 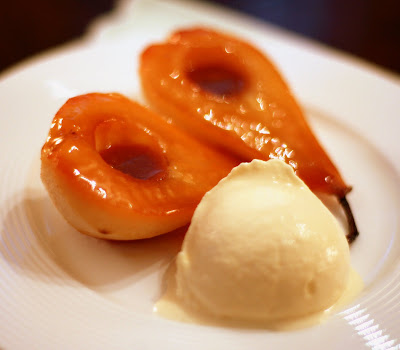 8 3-inch cinnamon sticks, each broken in half

1. Heat the milk with the cinnamon sticks until it just begins to simmer in a large heavy-bottomed saucepan. Remove from the heat, cover, and let steep for 45 minutes.

2. Strain the milk through a fine-mesh strainer into a bowl, discarding the cinnamon sticks, and return the cinnamon milk to the saucepan. Stir in 1 cup of the sugar, add the cream, and heat until steam rises from the surface.

3. Meanwhile, whisk the egg yolks, the remaining 1/4 cup sugar, and the salt together in a medium heatproof bowl. Gradually add the hot milk mixture, whisking constantly, then return the mixture to the saucepan and cook over medium heat, stirring constantly with a heatproof spatula, until the custard registers 185°F on an instant-read thermometer.

4. Immediately strain the custard though a fine-mesh strainer into a heatproof bowl. Chill over an ice bath, stirring occasionally, until cold. Cover and refrigerate for at least 6 hours, or, preferably, overnight.

5. Freeze the gelato in an ice cream maker according to the manufacturer’s instructions.

6. Preheat the oven to 350°F. In an ovenproof skillet, bring 3 tablespoons of the Lyle’s Golden Syrup to a simmer over medium heat. Add the pears, cut side down, and simmer until they begin to turn golden, about 8 minutes, stirring in 1 tablespoon water at a time when the syrup gets too thick.

7. Add 2 tablespoons water to the pan, turn the pears cut side up and roast until tender, 25-30 minutes.

8. Meanwhile, in a small saucepan, bring the remaining 2 tablespoons Lyle’s syrup, heavy cream and the star anise to a simmer. Whisk in the butter and salt. Drizzle the syrup over the roasted pears and serve 2 halves with a scoop of the Cinnamon Gelato.