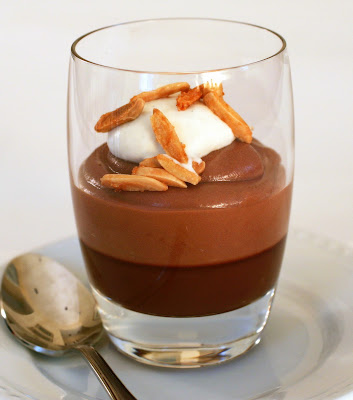 I first learned to make chocolate mousse in France, where the recipe was always the same: melt dark chocolate, whisk in egg yolks, fold in meringue, fold in whipped cream. Voila, chocolate mousse! That’s how I made it for a long time; if it was good 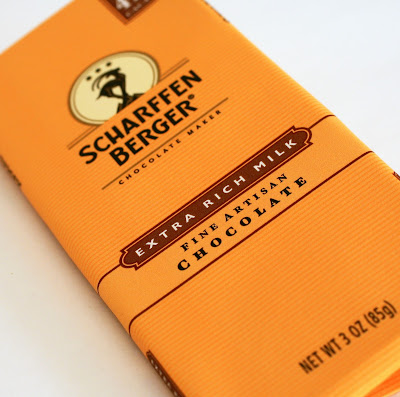 enough for the French, it was good enough for me. Years later a top pastry chef explained to me that you really only need two ingredients for a good chocolate mousse—chocolate and cream. Other ingredients, like eggs, just mask the flavor of the chocolate, 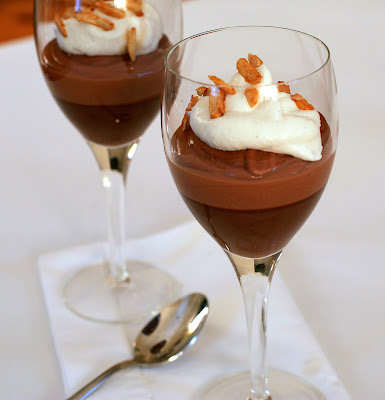 but restaurants like to add them because they are cheaper than chocolate. One thing I will say about eggs in chocolate mousse is that the yolks do give it a silky quality. To mimic this silky texture, you can actually add a tablespoon of neutral vegetable oil to your 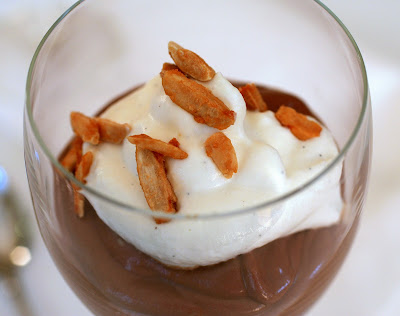 mousse, distasteful as that seems. Just whisk it into the melted chocolate and cream before folding in the whipped cream. I omitted this step, but it does work well, particularly if you are making your mousse several hours before serving. I chose to make 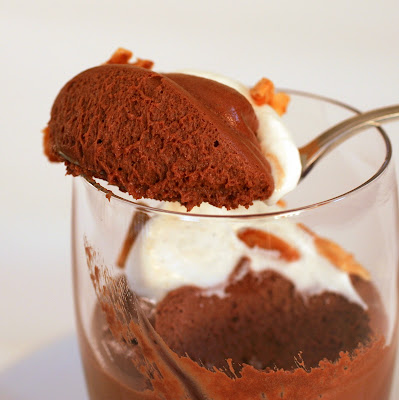 a milk chocolate mousse with a relatively dark milk chocolate, Sharffen Berger 41 percent, so it’s not overly sweet. I served the mousse over a gooey, half-milk, half-bittersweet chocolate ganache, and topped it off with crunchy, salty-sweet toasted almonds. An American spin on a French classic, and très bon!
Two-Tone Milk Chocolate Mousse with Sweet-and-Salty Almonds
Makes 6 servings
Soft Ganache Layer:
3 ounces 41% milk chocolate, chopped finely
3 ounces 60-64% bittersweet chocolate, chopped finely
1 cup heavy cream
Sweet-and Salty-Almonds:
1/2 cup (2 ounces) slivered blanched almonds
2 teaspoons light corn syrup
Pinch of coarse salt
Milk Chocolate Mousse:
8 ounces 41% milk chocolate, chopped
1 ½ cups heavy cream, divided
Sweetened Whipped Cream:
½ cup heavy cream
1 tablespoon confectioners’ sugar
½ teaspoon vanilla extract
Make the Soft Ganache Layer:
1. Place both chocolates in a medium bowl and set aside.
2. Heat the cream in a medium saucepan over medium heat until it just begins to boil. Pour the hot cream over the chocolate and let it stand for 1 minute to melt the chocolate. Whisk until well blended and smooth. Pour the ganache into six 8-ounce glasses, dividing it evenly (just over ¼ cup per glass). Refrigerate the ganache until firm, about 1 hour.
Make the Sweet-and-Salty Almonds:
3. Preheat the oven to 350°F. Line a baking sheet with a silicone baking mat or parchment paper. In a bowl, toss the nuts with the corn syrup and the salt until well coated. Spread the nuts onto the baking sheet, separating them as much as possible, and bake, stirring once with a spatula during baking, until golden, about 6 to 8 minutes. Set aside to cool.
Make the Milk Chocolate Mousse:
4. Place the chocolate and ½ cup of the cream in a large bowl and place the bowl over a saucepan half full of barely simmering water. Heat, stirring frequently, until the chocolate is completely melted and the mixture is smooth. Set the bowl aside and let the chocolate cool while you whip the cream.
5. Whip the remaining 1 cup cream in the bowl of an electric mixer, using the whisk attachment, at medium speed until it just holds very soft peaks (don’t overwhip, or the mousse will be grainy).
6. Scrape about one-third of the whipped cream into the bowl of chocolate and, using a rubber spatula, quickly fold the cream into the chocolate until half-blended. Scrape the remaining cream into the bowl and fold it in until the mixture is completely blended and without any streaks.
7. Pour the mousse on top of the soft ganache in the glasses, dividing it evenly. Refrigerate the mousse for about 1 hour before serving (or up to 8 hours).
Make the Sweetened Whipped Cream:
8. In the bowl of an electric mixer, using the whisk attachment, whip the cream,  confectioners’ sugar and vanilla extract at high speed until it holds medium peaks.
Serving:
9. To serve, spoon some whipped cream over each mousse and top with a sprinkling of Sweet-and-Salty Almonds.
Posted by Tish Boyle at 10:06 AM