Ever wonder who’s making the desserts at The White House these days? The Executive Pastry Chef of the Executive branch is Bill Yosses, a talented guy who has been in the pastry biz for over 30 years. He apprenticed in France, and then worked under chefs Daniel Boulud and Thomas Keller and was Pastry Chef at the 4- 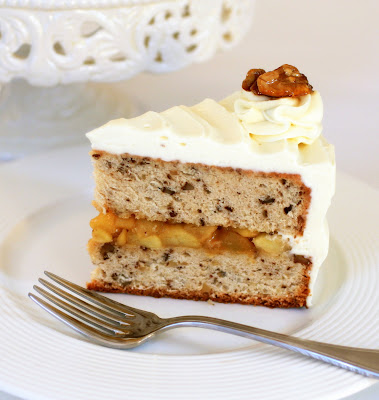 star Bouley Restaurant and Bakery. I’ve known Bill for many years, and have always liked him very much. He is a down-to-earth, no b.s. kind of guy, and lets the flavor in his desserts really shine through, without gimmicks. Recently Bill released his first cookbook, The Perfect Finish (Norton, 2010; $35). It’s my kind of 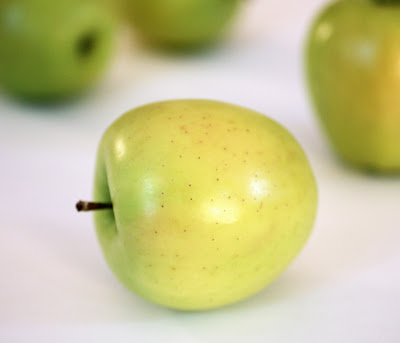 cookbook—the kind that when I flip through it I want to make just about everything in it. Bill’s desserts are simple, intriguing and beautifully executed. There are 80 recipes in The Perfect Finish, which Bill chose from a repertoire of over 5000. How did he decide what to include? “I’m always on the lookout for the 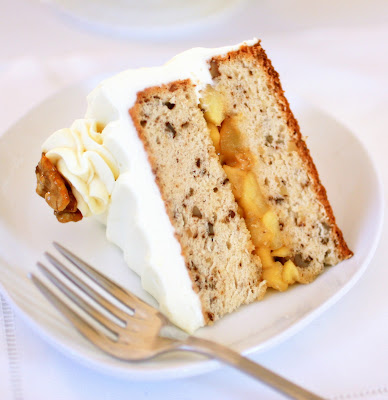 extraordinary, whether it’s a simple or a complex dessert. And I chose recipes that deliver a flavor beyond what you are used to and what you normally have.” Out of the 80 recipes that Bill chose, I chose his Walnut Layer Cake with Apple-Caramel Filling and Calvados Cream Cheese Icing, which features some of my favorite flavors. Though the results were mixed (see my recipe notes below), I am ready to try another recipe from The Perfect Finish, and very soon.
Recipe Notes: though it looked great, I found the cake itself to be a little tough and dry. Perhaps I overfolded the batter; I freely admit that that is a distinct possibility. I also found the apple filling to be too lemony, which detracted from the caramel notes. I would cut down the amount of lemon juice to 1 teaspoon next time. And the frosting was not sweet enough for my taste. I would double the amount of confectioners’ sugar next time, and leave out the Calvados, which I didn’t think worked. One final note: the recipe in the book calls for 3 small apples, cubed, or 680 grams. The 680 grams is just plain wrong--that would be more like 6 apples. Sorry to say it, but cookbooks are very poorly edited these days, and it is not always the author’s fault…
Walnut Layer Cake with Apple-Caramel Filling and Calvados Cream Cheese Icing
From The Perfect Finish (Norton, 2010) by Bill Yosses
Makes 1 cake to serve 8 to 10
Walnut Cake:
1 ¼ cups (142 g) confectioners’ sugar
¾ cup (80 g) almond flour
¾ cup (142 g) all-purpose flour
Pinch of salt
8 large egg whites, at room temperature
Pinch of cream of tartar
1 Tbs (12.5 g) granulated sugar
½ cup (113 g) packed light brown sugar
1 cup (84 g) finely chopped walnuts
Apple Caramel Filling:
1 cup (200 g) granulated sugar
Freshly squeezed juice of 1 lemon
1 cup (232 g) heavy cream
3 small Golden Delicious apples, peeled, cored and diced into cubes (about 2¼ cups)
Pinch of salt
Calvados Cream Cheese Icing:
2 packages cream cheese (16 oz)
½ cup (57 g) confectioners’ sugar
¼ cup (57 g) heavy cream
1 ½ Tbs Calvados
½ tsp vanilla extract
Candied or finely chopped walnuts, for garnish
For the Cake:
1. Position a rack in the center of the oven and preheat to 350°F. Grease an 8-inch springform pan with unsalted butter.
2. Sift the confectioners’ sugar, almond flour, all-purpose flour and salt onto a piece of parchment paper and set aside.
3. In the bowl of an electric mixer fitted with the whisk attachment, beat the egg whites with the cream of tartar and granulated sugar on medium speed until foamy and cloudlike. Gradually add the brown sugar, then raise the speed to high and beat until the meringue forms stiff, glossy peaks, about 10 minutes. The meringue must be super strong.
4. Sprinkle the sugar-flour mixture over the meringue and fold in until partially incorporated. Add the walnuts and fold just until the nuts are distributed—do not overmix. Scrape the butter into the pan and smooth out level. Bake on the center rack until a cake tester inserted into the center of the cake comes out clean, 50 to 70 minutes. Cool completely in the pan on a wire rack, at least 1 hour.
For the Filling:
5. Attach a candy thermometer to the side of a medium-size heavy saucepan. Over medium heat, melt the sugar with the lemon juice until it is a clear liquid, swirling the pan a few times to help it along, but do not stir. Make sure the cream in nearby and at the ready. Let the sugar syrup simmer, stirring occasionally, until the mixture is a dark golden-brown caramel (about 374°F), about 7 minutes. Drizzle in the cream, stirring, until it is smoothly incorporated. Add the apples and reduce the heat to keep the liquid at a gentle simmer until the apples are completely soft and golden in color, about 15 minutes. Stir in the salt and let cool.
For the Icing:
6. In the bowl of an electric mixer fitted with the paddle attachment, beat the cream cheese until softened. Add the confectioners’ sugar and beat until completely smooth, about 10 minutes. With the mixer running slowly, drizzle in the cream, Calvados and vanilla, scraping down the sides of the bowl. Beat for 5 minutes more to achieve a soft, spreadable consistency.
To assemble:
7. Side a thin knife or offset spatula around the sides of the pan and release the sides. Turn the cake over onto a flat surface and carefully remove the bottom of the pan. Using a long, serrated knife, slice the cake in half horizontally, and place the bottom half directly onto a serving platter. Use a slotted spoon to lift out the apples, shaking gently to remove as much caramel as possible. Scatter the apples evenly over the bottom layer of the cake. Replace the top layer and spread a third of the cream cheese icing over the whole cake to seal in the crumbs. Refrigerate for an hour, then apply a second layer of icing. Decorate with candied walnuts or sprinkle with finely chopped walnuts.
Posted by Tish Boyle at 3:23 PM