Lemon Cupcakes with Almond Buttercream and a Bit of Raspberry 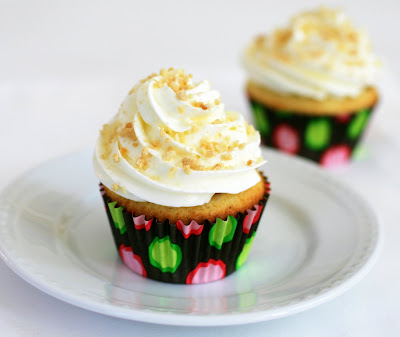 The other day I had lunch with a friend at a charming country-style restaurant on the Upper East Side of Manhattan, Square Meal. It’s owned by Yura Mohr, a lovely and incredibly talented woman who has had a take-out shop for the past twenty years and does catering for many high-profile NYC clients. Before that she had a luncheonette in Brooklyn Heights and cooked for The Heights 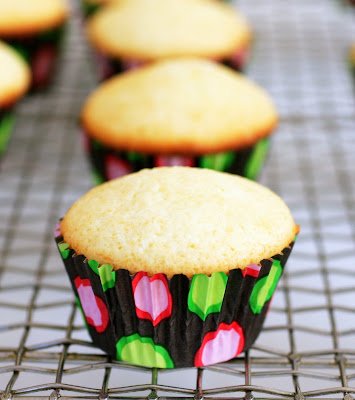 Casino, a private club to which I belong (primarily so I can play tennis, a feeble attempt to burn some calories). People at the club still reminisce about the ‘Yura Burger’, possibly the best burger known to mankind, served with housemade ketchup. Her newest venture is Square Meal, a restaurant adjacent to her take-out shop. The food here is unpretentious and amazing. Little cheddar cheese and rosemary biscuits arrive when you are seated, and, like most of 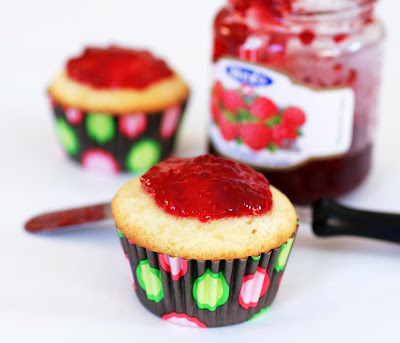 the food at this restaurant, they are attention-grabbing in their simplicity and deliciousness.  I moved on to a fabulous chicken salad sandwich and a salad with minty pickled zucchini strips. But it’s the dessert that I keep thinking about—a Shaker Lemon Cake with Toasted Almond Whipped Cream and Lemon Sorbet. This cake was a simple lemony Bundt cake, but unbelievably tender and buttery. A light-as-air toasted almond whipped cream and tart 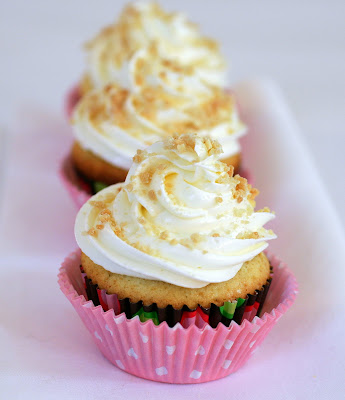 lemon sorbet brought this dessert into the realm of the spectacular. I wanted the recipe, but I didn’t ask—I thought it would’ve been presumptive of me and didn’t want to put the waiter or Yura’s chef, Buddy, on the spot. So I decided to use Yura’s combination of flavors in my own down-home cupcake: Lemon Cupcakes with Almond Buttercream and a Bit of Raspberry. I deviated a little with the raspberry, but felt the cupcake needed another layer of flavor, and it worked beautifully. Perhaps not as good as that Lemon Shaker Lemon Cake (aren’t the Shakers known for their pies, not their cakes?), but I can only try. Anyhow, next time you’re in New York, stop in at Square Meal for lunch or dinner, and make sure you order dessert, whatever it is—you’ll be very happy you did. www.squaremealnyc.com

Lemon Cupcakes with Almond Buttercream and a Bit of Raspberry

Makes 12 cupcakes
Lemon Cupcakes:
1 ½ cups (171 g) cake flour
1 ¼ tsp baking powder
¼ tsp salt
½ cup (113 g) unsalted butter, softened
¾ cup plus 2 Tbs (170 g) granulated sugar
2 large eggs
1 tsp finely grated lemon zest
2 Tbs freshly squeezed lemon juice
1/3 cup whole milk
Lemon Syrup:
1/4 cup lemon juice
1/4 cup water
6 Tbs (72 g) granulated sugar
Almond Buttercream:
½ cup (100 g) granulated sugar
2 ½ (75 g) large egg whites
1 ½ Tbs water
1 cup (227 g) unsalted butter, slightly softened
¼ tsp almond extract
Raspberry layer:
2 Tbs raspberry jam
Garnish:
Finely ground toasted almonds
Make the cupcakes:
1. Position a rack in the center of the oven and preheat the oven to 350°F. Line a 12-cup muffin pan with paper liners.
2. In a medium bowl, sift together the cake flour, baking powder, and salt. Whisk to combine and set aside.
3. In the bowl of an electric mixer, using the paddle attachment, beat the butter at medium speed until creamy, about 30 seconds. Gradually add the sugar and beat at high speed for 3 minutes, until well blended and light. Scrape down the sides of the bowl with a rubber spatula, reduce the speed to medium, and add the eggs one at a time, beating well after each addition and mixing until blended. Beat in the lemon zest and lemon juice until blended. Reduce the speed to low and add the flour mixture in three additions, alternating it with the milk in two additions. Mix just until blended. Scrape the batter into the prepared cupcake pan and smooth the tops with a rubber spatula.
4. Bake the cupcakes for 22 to 25 minutes, until they are golden brown around the edges and a toothpick inserted into the center of each cake comes out clean. Cool the cakes in the pans, set on wire racks, for 15 minutes.
5. Transfer the cupcakes to the wire rack and cool completely.
Make the syrup:
6. While the cupcakes are baking, combine the lemon juice, water and sugar in a small saucepan and bring to a boil over medium heat, stirring to dissolve the sugar. When the cupcakes come out of the oven and are still hot, brush them with some of the syrup.


Make the buttercream:
7. Pour enough water into a skillet so that it comes 1/2-inch up its sides. Bring the water to a simmer; reduce the heat to medium-low to maintain a simmer.
8. In the bowl of an electric mixer, combine the sugar, egg whites, and water. Place the bowl in the skillet of water and whisk gently until the mixture registers 160°F on an instant-read thermometer.
9. Transfer the bowl to the mixer stand and, using the whisk attachment, beat at medium-high speed until the meringue is cool and forms stiff, shiny peaks, about 5 minutes.
10. Reduce the speed to medium and beat in the butter, one tablespoon at a time. Beat in the almond extract. Beat at high speed until the buttercream is smooth and emulsified, about 1 minute.
Frost the cupcakes:
11. Spread about ½ tsp raspberry jam on each cupcake, leaving a ½-inch border around the edge.
12. Scrape the buttercream into a pastry bag fitted with a medium star tip (or plain, if you prefer). Pipe a generous spiral of buttercream on top of each cupcake, and then sprinkle with some of the toasted ground almonds.
Posted by Tish Boyle at 12:52 PM