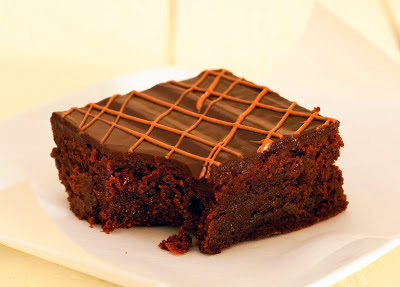 Weeks before the Superbowl, Americans across the country begin to obsess about their Superbowl menus. Buffalo chicken wings? Chili? Foot-long heros, perhaps? That old standby, guacamole and tortilla chips? Whatever the choice, the common denominator for 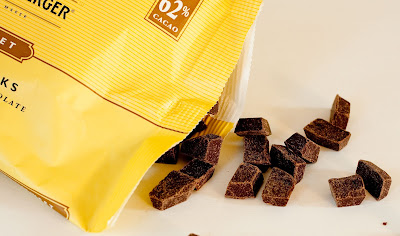 Superbowl food is that it should be down-home and distinctly American (albeit occasionally with a Mexican accent). Since I’m usually a guest, and not the host, at Superbowl celebrations, I tend to focus on what to bring for dessert. My top choice? Brownies. 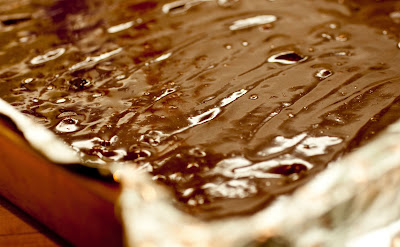 Super-fudgy ones. After all, what could be more American than that? Plus, they’re portable, chocolaty, and almost everyone loves them. And because I’m a kitchen-sink-girl, I like my brownies glazed, with a little drizzle for eye appeal. This recipe is an 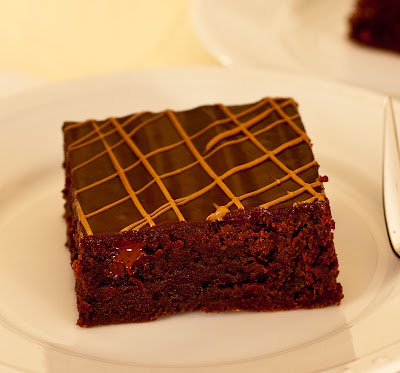 adaptation of my favorite, created by my friend Judith Sutton, from her book Sweet Gratitude. I changed the chocolate proportions a bit, and used Scharffen Berger baking chunks in the batter, a convenience product that I recently discovered, and added the 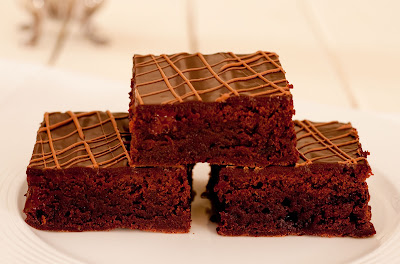 glaze. These ultra-fudgy brownies are ideal Superbowl fare – when your team is winning, why not indulge in an super-rich, indulgent brownie? And, if you’re losing, calories be damned, might as well drown your sorrows in an excellent brownie. There’s always next year. Go Giants!

Make the Fudgy Brownies:
1. Position a rack in the middle of the oven and preheat the oven to 350°F. Line a 9-by-13-inch baking pan with foil, leaving an overhang on the narrow ends.
2. Combine the butter, unsweetened and 4 ounces bittersweet chocolate in a medium, heavy saucepan and melt over low heat, stirring frequently until smooth. Remove from the heat.
3. In a large bowl, beat the eggs and both sugars with an electric mixer on low speed just until smooth. Beat in the salt. Beat in the melted chocolate mixture, then beat in the vanilla. Scrape down the sides of the bowl. Beat in the flour in two additions (the batter will be thick). Stir in the 6 ounces of chocolate chunks.
4. Scrape the batter into the prepared pan and smooth the top. Bake for 23 to 25 minutes, or until the top is set but still soft and the edges are puffed and just beginning to pull away from the sides of the pan. A toothpick inserted in the center will come out still gooey. Transfer the pan to a wire rack to cool completely.
5. Refrigerate the brownies for 30 minutes before glazing.

Make the glaze:
6. Place the chocolate in a medium bowl. Place the cream in a small saucepan and bring to a boil. Remove from heat and pour the hot cream over the chocolate. Stir gently until the chocolate is completely melted and the mixture is smooth. Stir in the vanilla extract.

Glaze the brownies:
7. Remove the pan from the refrigerator and lift the brownies out of the pan using the foil at the short ends as handles. Carefully invert the brownies onto a large cutting board and peel off the foil. Pour the warm glaze over the flat side of the brownies, spreading it into an even layer and covering the entire surface of the top (formerly the bottom). Let the glaze set while you melt the milk chocolate.

Drizzle the milk chocolate over the glaze:
8. Place the milk chocolate a small bowl and place the bowl over a small saucepan of simmering water. Heat, stirring frequently, until melted. Transfer the melted milk chocolate into a parchment paper cone (or use a small Ziplock bag; seal the bag and snip a small hole in one of the corners of the bag). Drizzle the milk chocolate in diagonal lines over the glazed brownies. Refrigerate the brownies for at least 30 minutes before cutting.
add the chocolate to the pan. Stir until the chocolate is completely melted and the mixture is smooth. Stir in the vanilla extract. Transfer the glaze to a small bowl. Cover the surface of the glaze with a piece of plastic wrap and let it cool for about 10 minutes before using.
9. With a large sharp knife, cut the brownies into 48 squares. (The brownies can be stored in an airtight container at room temperature for up to 3 days; they can also be frozen, well wrapped, for up to 2 weeks.)