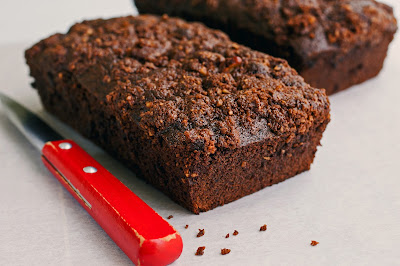 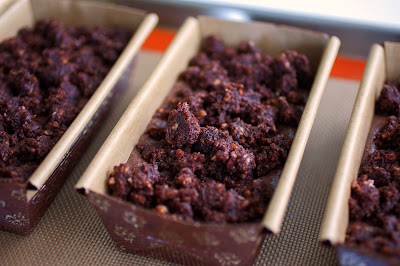 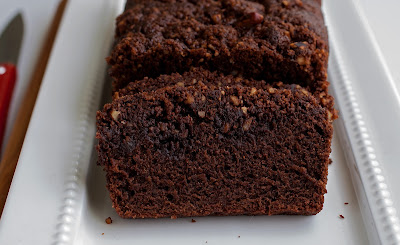 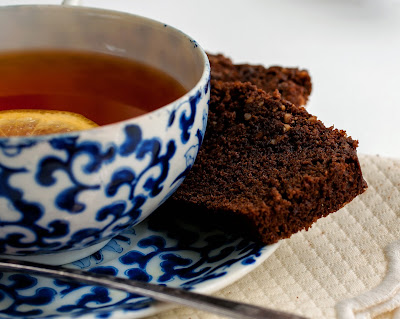 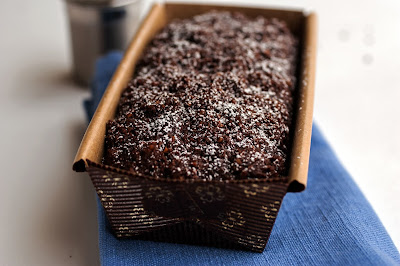 To make the crumble:
1. Using a food processor, pulse the butter, Demerara sugar, cake flour, hazelnuts, cocoa powder, baking soda, salt, and cinnamon until all the ingredients come together to form a paste. Transfer the crumble to an airtight container and refrigerate for at least 30 minutes.

To make the cake:
2. Preheat the oven to 350°F. Line two 9-by-5-inch loaf pans with parchment paper along the bottom and up the long sides so that extra parchment paper extends about 2 inches beyond the sides of the pan. (I used three 6 ½-by-3 ½-inch decorative paper loaf pans instead.)
3. In a large bowl, sift together the all-purpose flour, cocoa powder, salt, baking powder, and coffee. Set aside.
4. In the bowl of a stand mixer, beat together the butter and sugar at high speed until light and fluffy, about 3 minutes. At medium speed beat in the eggs, one at a time, scraping down the sides of the bowl as necessary. Add the water and vanilla and mix until smooth. Reduce the speed to low and add the flour mixture in three additions, alternating it with the buttermilk in two additions and mixing until smooth. Scrape the batter into the prepared pans, dividing it evenly. Crumble the crumble in pieces over the tops of the cakes, dividing it evenly. Bake the cakes for 45 to 55 minutes* (baking time will depend on the size of the pans), until a toothpick inserted into the center of each cake comes out clean. Cool the cakes in the pans set on a wire rack for 20 minutes. Unmold the cakes and cool on the wire rack completely. Store tightly wrapped in plastic at room temperature for up to 5 days.

*Recipe Notes:
I used toasted pecans instead of hazelnuts, and they were great.
I cut down on the salt in the cake and used 1 ¼ teaspoons instead of 1 ½.
I think you could use a 70% cacao chocolate here; just cut back on the sugar in the cake to 1 1/3 cups to compensate.
The baking time in the original recipe is 30 to 35 minutes, but I found it took quite a bit longer. It’s possible the recipe was tested in a convection oven, which would make a big difference.