Rhubarb and Memories of Dad 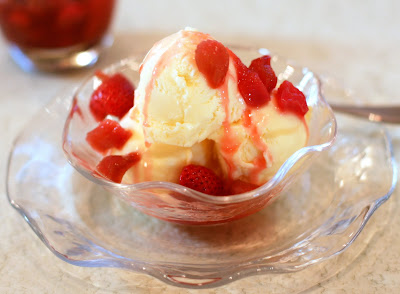 My Dad loved rhubarb. I say ‘loved’ because he died four years ago. I still think of him every day, though, and there are so many things, including rhubarb, that remind me of him. Pickled herring in sour cream, for example. My sisters and I turned our noses up at the sight of it, but Dad loved it. The song When I’m Calling You—he hummed it all the time (I think it was big in the 1940’s). And 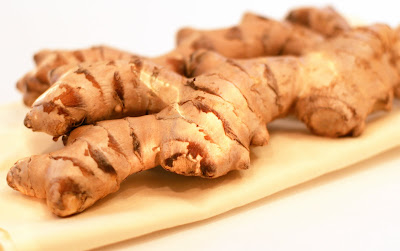 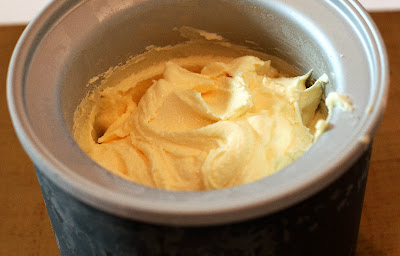 the rhubarb. My Dad didn’t cook—he was a doctor and didn’t have much free time—but he loved rhubarb so much that throughout the spring months he would cook it up with sugar and water until it had completely fallen apart into a stringy mess of pink goo. That really made him happy. He didn’t even need any vanilla ice cream to eat with it. Just rhubarb. I know this dessert composition 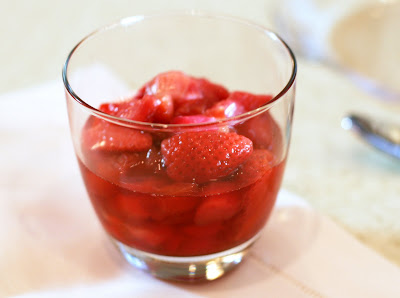 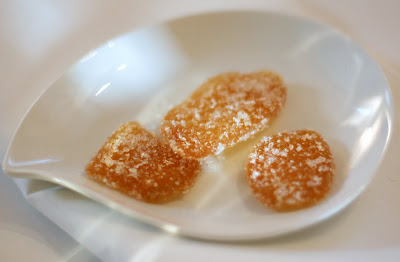 would have made him really happy, too — a spicy ginger ice cream made with a generous amount of fresh ginger and topped off with a sweet-tart rhubarb-strawberry compote. It’s a wonderful combination. I don’t cook my rhubarb as long as Dad did, only because it looks better in the bowl. Not that he would’ve cared about that.

Strawberry-Rhubarb Compote with Ginger Ice Cream
Ginger Ice Cream:
(Makes about 1 quart)
4 ounces fresh ginger, unpeeled and thinly sliced
3 cups whole milk
1 cup heavy cream
1 cup plus 2 tablespoons granulated sugar, divided
8 large egg yolks
Pinch of salt
Strawberry-Rhubarb Compote:
1 pound fresh rhubarb, cleaned and cut into ½-inch pieces
¾ cup (150 g) granulated sugar
¼ cup water
1 pint fresh strawberries, hulled and cut in half (or quarters, if large)
1 teaspoon lemon juice
¼ cup finely chopped crystallized ginger
Make the ice cream:
1. Fill a large bowl one-third of the way with water and ice cubes and set aside. Half fill a medium saucepan with water and bring to a boil. Add the ginger and boil for 1 minute. Strain and set aside to cool.
2. In a heavy-bottomed medium saucepan, combine the milk, cream, ¾ cup sugar and blanched ginger. Bring to a simmer over medium heat.
3. Meanwhile, in a medium bowl, whisk together the egg yolks, salt, and remaining 6 tablespoons sugar. Whisk about ½ cup of the hot milk mixture into the yolk mixture. Whisk this into the remaining hot milk mixture in the saucepan.
4. Return the custard to the stove and cook over medium-low heat, stirring constantly with a wooden spoon, until it thickens enough to coat the back of the spoon and reaches 175°F on an instant-read thermometer. Strain the custard through a fine-mesh sieve into a large bowl. Place the bottom of the bowl into the bowl of ice water. Let it sit there, stirring occasionally, until the custard is cool. Cover the bowl and refrigerate the base for 4 hours, until it is well chilled.
5. Process the ice cream in an ice cream maker according to the manufacturer’s directions. Freeze in an airtight container for at least 4 hours before serving.
Make the compote:
6. Combine rhubarb, sugar, and water in heavy large saucepan over medium heat. Bring to simmer, stirring occasionally, until the sugar dissolves, about 3 minutes. Simmer gently until rhubarb is just tender (but not falling apart), stirring occasionally, about 5 minutes. Remove from heat. Stir in strawberries and lemon juice. Transfer to bowl and chill until cold, about 1 hour. Once chilled, stir in the crystallized ginger.
To serve:
7. Scoop some Ginger Ice Cream into a bowl and top with some of the compote.
Posted by Tish Boyle at 5:06 PM