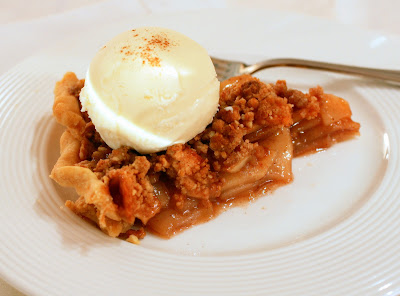 Apple season is in full swing, and there was an impressive variety on display at my local farmers’market yesterday—McIntosh, Macoun, Gala, Fuji, Northern Spy, Braeburn, Cortland and more. I succumbed, of course. It was a crisp fall day, just the right kind of 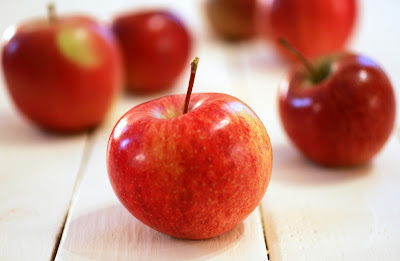 day for using my bounty of apples to make a pie. I love apple pie in all its forms, from small, free-form galettes to a double-crusted pie with a cheddar crust to a classic caramelized tarte Tatin. But this time I wanted to make a crumb-topped pie, which reminds me of 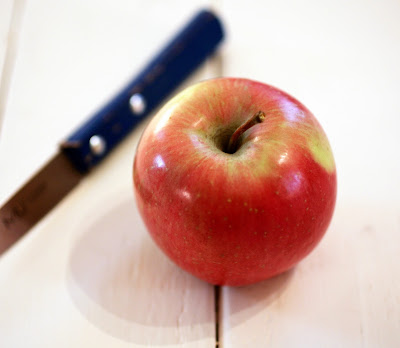 the ones my Mom would sometimes pick up from our local bakery when I was a child. Part pie, part crisp, this Streusel-Topped Apple Pie is relatively easy to make (no upper crust to deal with), and it has a wonderful crispy-crunchy texture that contrasts beautifully 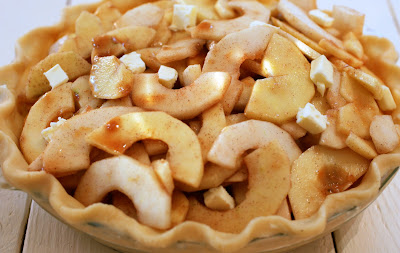 with its buttery apple filling. It takes a while to bake—almost two hours—but as it fills the house with that heady scent of cinnamon and apples, you’ll begin to appreciate that long baking time. Serve this pie slightly warm with vanilla ice cream. 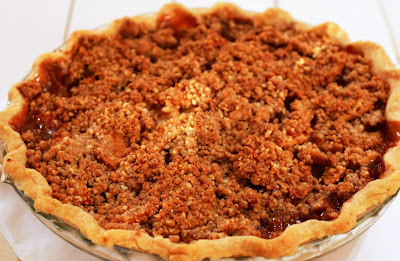 Note: the recipe for the pie dough makes just enough for the bottom crust, without any scraps. If you want to decorate the edge of your pie with pastry leaves, which looks lovely, double the recipe and freeze any leftover dough. Brush the pastry leaves with eggwash before baking.

Streusel-Topped Apple Pie
Makes one 9-inch pie, serving 8
Pie Crust:
1 1/4 cups all-purpose flour
1/8 teaspoon salt
4 tablespoons unsalted butter, cut into 1/2-inch chunks and frozen
1/3 cup solid vegetable shortening, frozen
3 to 4 tablespoons ice water
Apple Filling:
3 pounds apples (I use a mix of Macoun, Macintosh and Fuji), peeled, cored and sliced ¼-inch thick
1 tablespoon freshly squeezed lemon juice
2 ½ tablespoons cornstarch
2/3 cup firmly packed light brown sugar
1/3 cup granulated sugar
1 teaspoon finely grated lemon zest
1 teaspoon finely ground cinnamon
¼ teaspoon finely grated nutmeg
½ teaspoon salt
¼ teaspoon ground cloves
1 tablespoons chilled unsalted butter, cut into ¼-inch pieces
Streusel Topping:
1/2 cup all-purpose flour
¼ cup slivered almonds
3 tablespoons light brown sugar
½ teaspoon ground cinnamon
Pinch of salt
3 tablespoons unsalted butter, melted
1/2 teaspoon vanilla extract
Make the crust:
1. Place the flour and salt in a food processor fitted with the metal chopping blade and pulse on and off until combined. Scatter the butter pieces and the shortening, in large chunks, over the flour mixture. Pulse the machine on and off until the mixture resembles coarse meal. Add 3 tablespoons of the ice water and process until the mixture just starts to come together. (If the dough seems dry, add the remaining 1 tablespoon water as necessary. Do not allow the dough to form a ball on the blade, or the resulting crust will be tough.)
2. Turn the dough out onto a work surface and shape it into a thick disk. Wrap the disk in plastic wrap and chill for at least 2 hours.
3. Lightly flour a large work surface. Allow the dough to soften at room temperature just until it is pliable (about 20 minutes). Place the dough disk on the floured surface and sprinkle some flour over it. Roll the dough from the center out in every direction, flouring the work surface as necessary to prevent sticking. You want a round about 1/8 inch or slightly less thick and about 12 inches in diameter.
4. Transfer the crust to a 9-inch pie pan by rolling it loosely around the rolling pin and unrolling it carefully over the pan. Press the dough first into the bottom of the pan and then against the sides. Patch any holes or cracks with dough scraps. Trim the edges of the dough with scissors, leaving about 3/4 inch of overhang. Fold the dough underneath itself and crimp the edge with your fingers. Refrigerate for at least 45 minutes.
Make the filling:
5. Position a rack in the center of the oven and preheat the oven to 350°F. In a large bowl, toss the apple slices with the lemon juice. In a small bowl, stir together the cornstarch, granulated sugar, brown sugar, lemon zest, cinnamon, nutmeg, salt, and ground cloves. Sprinkle the cornstarch mixture over the apple slices and toss well to combine. Spoon the filling into the pie dough. Dot the filling with the butter.
Make the streusel topping:
6. In a food processor, pulse together the flour, almonds, sugar, cinnamon and salt. Combine the melted butter with the vanilla extract and add the bowl. Pulse until the mixture is crumbly.
7. Sprinkle the top of the pie with the streusel, right up to the edge. Place the pie pan on a baking sheet and bake for 30 minutes. Cover the pie with a piece of foil, and continue to bake until the apples are cooked through, about an hour longer. Remove the foil and bake for another 15 minutes, until the top and crust are golden. Remove the pie from the oven and cool on a wire rack for at least an hour before serving.
8. Serve each slice with a scoop of vanilla ice cream.
Posted by Tish Boyle at 11:43 AM