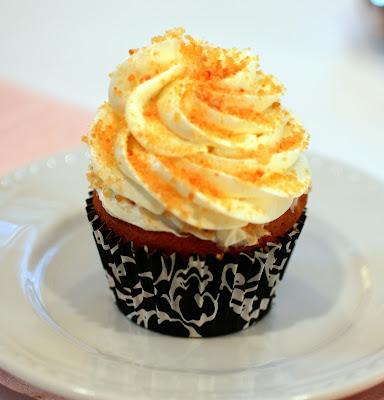 Ten years ago I wrote a book called Diner Desserts (Chronicle, 2000), which is a collection of recipes for some of my favorite comfort food-style desserts. I’ve been a lifelong diner fan, and over the years I’ve logged many hours hanging out in diners, eating pie, 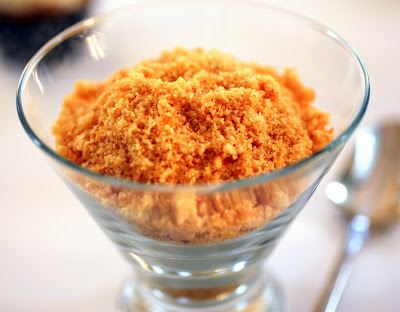 drinking coffee and gossiping with friends. I love the casual atmosphere and conviviality of the diner, and I love those rustic looking diner pies, the chocolate and butterscotch puddings topped with swirls of whipped cream, and the mile-high layer cakes. One 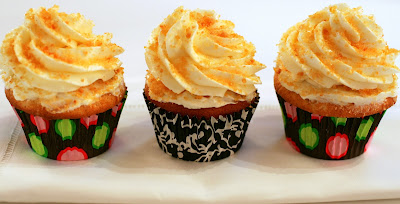 of the cakes featured in Diner Desserts is a Toasted Almond Brittle Crunch Cake, layers of white cake frosted with an almond buttercream and sprinkled with a finely ground almond brittle crunch. It was inspired by the Good Humor Toasted Almond Ice 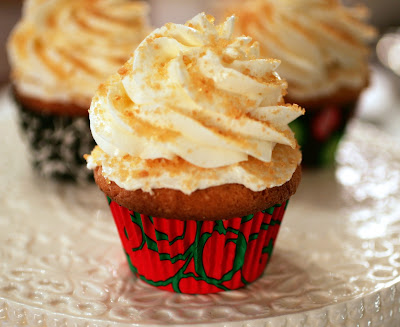 Cream Bar—an iconic frozen treat and one of my top picks from the ice cream truck when I was a kid—and it’s delicious. I decided that this cake would also make a great cupcake, so I revamped the recipe a bit and turned it into a portable version of the original treat. 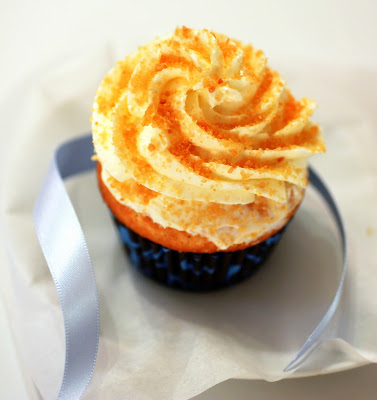 The secret is to pipe the buttercream really high on the cupcakes, mimicking the look of the over-the-top-tall diner cake, and giving everyone the generous amount of frosting that they crave.
Toasted Almond Crunch Cupcakes
Makes 12 cupcakes
Almond Cupcakes:
1 ½ cups plus 2 tablespoons (163 g) sifted cake flour
1 ½ teaspoons baking powder
1/4 plus 1/8 teaspoon salt
1/2 cup (1 stick) unsalted butter, softened
¾ cup (150 g) granulated sugar
3 large egg whites
¼ teaspoon almond extract
2/3 cup (160 ml) whole milk
Almond Brittle Crunch:
1/2 cup (100 g) granulated sugar
2 tablespoons water
1/4 teaspoon lemon juice
1/2 cup blanched almonds, toasted (about 7 minutes at 350°F)
Fluffy Almond Buttercream (makes about 5 cups):
1 cup (7 oz/ 200 g) granulated sugar
5 large egg whites
3 tablespoons (45 ml) water
2 cups (4 sticks/1 lb/454 g) unsalted butter, slightly softened
1/2 teaspoon almond extract
Make the cupcakes:
1. Preheat the oven to 350°F. Line a 12-cup muffin pans with paper liners.
2. In a medium bowl, sift together the cake flour, baking powder, and salt. Whisk to combine and set aside.
3. In the bowl of an electric mixer, using the paddle attachment, beat the butter at medium-high speed until creamy, about 30 seconds. Gradually add the sugar and beat at high speed until light, about 2 minutes. Reduce the speed to low and add the egg whites one at a time, beating well after each addition and scraping down the sides of the bowl occasionally. Beat in the almond extract. If you have a splatter shield for your mixer, attach it now (the milk tends to splash up as you add it). Add the flour mixture at low speed in three additions, alternating it with the milk in two additions. Mix just until the flour is incorporated. Scrape the batter into the prepared muffin cups, dividing it evenly.
4. Bake the cupcakes for about 20 minutes, until lightly browned around the edges. Cool the cupcakes on a wire rack before frosting.
Make the crunch:
6. Lightly oil a large baking sheet. In a small saucepan, combine the sugar, water and lemon juice. Stir over medium heat until the sugar dissolves. Increase the heat to medium-high and continue to cook, without stirring, for 4 to 6 minutes, until the syrup caramelizes. Immediately remove the pan from the heat. Quickly stir the slivered almonds into the hot caramel. Pour onto the baking sheet. Cool the brittle for 30 minutes, or until hard.
7. Coarsely chop the brittle on a cutting board using a large knife.  Process the brittle in a food processor for 30 to 40 seconds, or until finely ground. Transfer to a small bowl.
Make the buttercream:
8. Pour enough water into a skillet so that it comes 1/2-inch up its sides. Bring the water to a simmer; reduce the heat to medium-low to maintain a simmer.
9. In the bowl of an electric mixer, combine the sugar, egg whites, and water. Place the bowl in the skillet of water and whisk gently until the mixture registers 160°F on an instant-read thermometer.
10. Transfer the bowl to the mixer stand and, using the whisk attachment, beat at medium-high speed until the meringue is cool and forms stiff, shiny peaks, about 5 minutes.
11. Reduce the speed to medium and beat in the butter, one tablespoon at a time. Beat in the almond extract. Beat at high speed until the buttercream is smooth, about 1 minute.
Frost the cupcakes:
12. Spread a thin layer of buttercream on each cupcake and sprinkle with a layer of Almond Brittle Crunch. Scrape the remaining buttercream into a pastry bag fitted with a medium star tip. Pipe the frosting generously on top of each cupcake, swirling it dramatically. Sprinkle the cupcakes with more of the Crunch. Serve at room temperature.
Posted by Tish Boyle at 7:53 PM