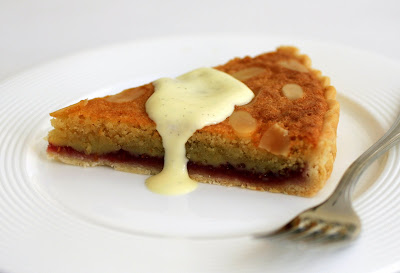 The recent bout of rainy weather in New York has me in a British state of mind, which is timely, as there’s been a lot of action on that side of the pond this week. It was almost thirty years ago that more than 30 million people (mostly dewy-eyed women, according to my 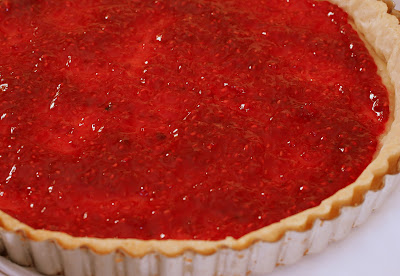 woefully unromantic husband) tuned in to see Charles and Diana getting hitched.  Today, many more royal-watchers watched as their offspring William married the adorable Kate Middleton. I must admit that I’m a sucker for all that pomp and circumstance, and no 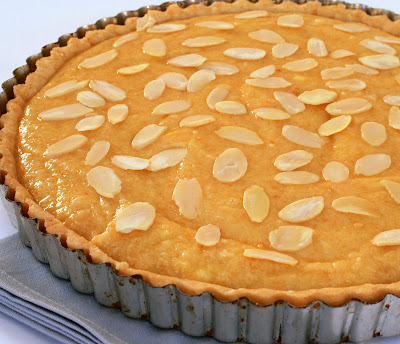 one does it better than the Brits. They excel at royal weddings and funerals, particularly. Yes, I love all that splendid ritual, but no, I did not wake up at 4 a.m. to watch it on the telly. It was more like 6:30,
. 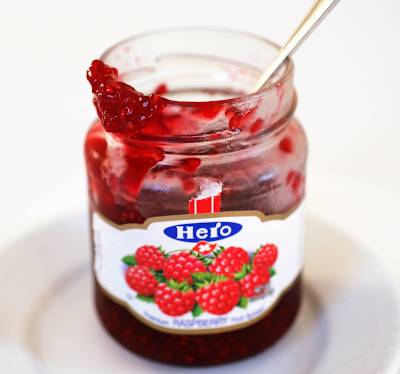 so I missed a good bit of the action. But what I saw was absolutely perfect. Kate Middleton's wedding dress was beautiful, very Grace Kelly, and the couple really did look like they were in love and happy to be marrying each other.
In honor of the royal wedding, I made a classic English dessert to enjoy with a cup of tea. It’s a Bakewell tart, which I’ve never made before, and I think it’s smashing. To make it, you bake a tart shell, spread it with layer of jam, top it with almond frangipane 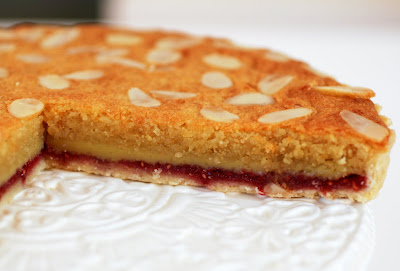 and a sprinkling of almonds, bake it again, and Bob’s Your Uncle, Bakewell Tart! I served it with a classic Vanilla Custard Sauce (a.k.a. Crème Anglaise), but vanilla ice cream, whipped cream or even clotted cream would also be delightful with it. I bet even the Queen herself would approve of this dessert. So raise a glass of champers to Will and Kate, and may they have a very long and loving marriage (unlike most of the royals)!
Bakewell Tart
Makes one 9 1/2-inch tart serving 8
Tart Crust:
1 cup (121 g) all-purpose flour
¼ cup (28 g) cake flour
½ teaspoon sugar
¼ teaspoon salt
6 tablespoons (3 oz) unsalted butter, cut into ½-inch cubes and frozen for 20 minutes
2 tablespoons shortening
2 tablespoons ice water
Almond Filling:
1/2 cup raspberry jam (with or without seeds, as you prefer – I like with)
1 cup (150 g) whole or slivered blanched almonds
¾ cup (150 g) granulated sugar, divided
10 1/2 tablespoons (150 g) unsalted butter, at room temperature
3 large eggs
1 large egg yolk
1/8 tsp salt
Finely grated zest of 1 lemon
1 teaspoon vanilla extract
¼ cup sliced almonds
Vanilla Custard Sauce (makes about 2 ¼ cups):
1 cup heavy cream
1 cup whole milk
1/2 vanilla bean
4 large egg yolks
1/4 cup granulated sugar
Pinch of salt
Make the tart crust:
1. Place the flours, sugar and salt in the bowl of a food processor and pulse few times to combine. Add the butter pieces and shortening and toss lightly with a spoon to coat them with flour. Blend the fat and flour with about five 1-second pulses or until the mixture is the texture of coarse meal with some of the butter pieces the size of peas. Sprinkle the water over the flour mixture and process continuously until the dough begins to clump together.  Do not over-process; the dough should not form a ball. Turn the dough out onto a work surface and shape it into a thick 4-inch wide disc. Wrap the dough in plastic wrap and chill until firm enough to roll, about 30 minutes.
2. Place unwrapped dough on a work surface that has been lightly dusted with flour. Using a rolling pin, roll the dough out into an 11-inch circle, lifting and rotating the dough often, while dusting the work suface and dough lightly with flour as necessary. Roll the dough up on the rolling pin and unroll it over a 9 1/2-inch fluted tart pan with a removable bottom. Gently press the dough onto the bottom and up the sides of the pan. Roll the pin over the top of the pan to trim off the excess dough. Lightly prick the bottom of the dough with a fork at 1/2-inch intervals. Refrigerate the dough in the pan for 20 minutes to firm up the dough. (If you like, roll out the dough scraps and cut them into small heart shapes. Brush them with eggwash, sprinkle with sugar and bake for 7-8 minutes. These can be used to garnish the tart.)
3. Preheat the oven to 350°F. Right before baking, line the dough with aluminum foil or parchment paper and cover with pie weights or dried beans. Place the tart pan on a baking sheet and bake for 20 minutes. Carefully lift the foil (along with the weights) out of the tart pan and bake the crust for 10 minutes longer, until lightly golden. Transfer the tart pan to a wire rack and cool completely. Leave the oven on.
Make the filling:
4. Spread the jam in an even layer over the base of the tart shell. Spread the almonds on a baking sheet and bake, tossing them once during baking, for 8 minutes, until they are fragrant and golden brown. Cool completely.
5. Place the almonds and ¼ cup (50 g) of the sugar in the bowl of a food processor and process until finely ground.
6. In the bowl of an electric mixer fitted with the paddle attachment, beat the butter and remaining ½ cup (100 g) sugar at high speed until creamy and well blended, about 2 minutes. Reduce the speed to medium and gradually add the eggs and yolk, mixing until blended. Add the salt, ground almonds, lemon zest and vanilla and mix at low speed until blended. Remove the bowl from the mixer stand and stir the batter a few times to make sure it is evenly blended.
6. Spoon the batter over the jam and, using a small, offset metal spatula, spread it into an even layer. Scatter the sliced almonds evenly over the filling and bake for about 30 minutes, until golden brown and set. Cool completely.
Make the sauce:
7. In a medium saucepan, combine the cream and milk. Using a paring knife, split the vanilla bean half lengthwise. Scrape out the tiny seeds from the pod and add then to the pot along with the pod. Cook the mixture over medium-high heat until bubbles begin to form around the edge of the pan. Remove the pan from the heat, cover, and let the mixture steep for 15 minutes.
8. In a medium bowl, whisk together the egg yolks, sugar, and salt until blended. Reheat the cream mixture until bubbles form around the edges of the pan again. Gradually whisk the hot cream mixture into the yolk mixture until blended. Return the entire mixture to the saucepan and cook over medium-low heat, stirring constantly with a wooden spoon, until the sauce thickens enough so that a path remains when you run your finger across the back of the sauce-coated spoon. The sauce should register 175°F on an instant-read thermometer.
9. Pour the sauce through a fine-mesh sieve into a medium stainless steel bowl. Set the bowl containing the sauce into a large mixing bowl filled one-third of the way with ice water (be careful that the water doesn’t splash into the sauce). Stir the sauce frequently until it is slightly chilled, about 15 minutes. Cover the bowl of sauce and refrigerate until ready to serve.
Serve the tart:
10. Serve slices of the tart with the Vanilla Custard Sauce.
Posted by Tish Boyle at 9:20 AM