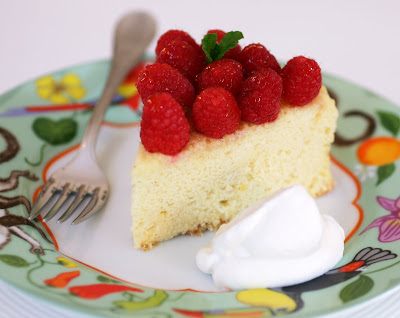 With all the turmoil that is unfolding in Japan, the Japanese people are much in my thoughts these days. I admire so much about them—their quiet patience and tenacity in the face of catastrophe; their centuries-old customs and rituals; their style and creativity; and, of 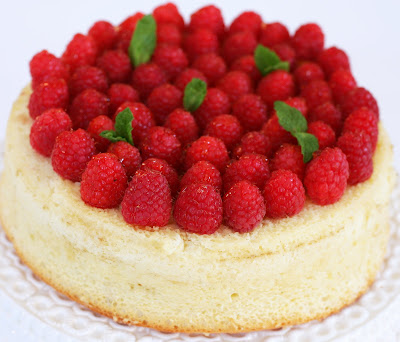 course, their incredible cuisine. While Japanese cuisine is a thing unto its own, occasionally they have been known to put their own spin on American foods, including cheesecake. Japanese-style cheesecake is similar in appearance to its American cousin, and is 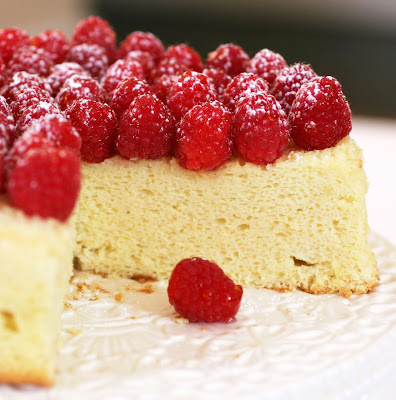 made with almost the same ingredients, but it is distinctly different. It’s much, much lighter than our cheesecake, and is made with a fraction of the amount of cream cheese. It also has whipped egg whites folded into the batter, giving it a light-as-a-cloud, spongy 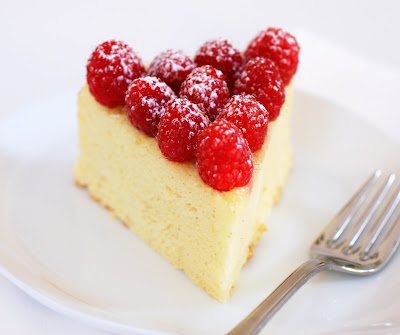 texture that is sublime. If you’ve never tried it, I urge you to give it a whirl—you’ll be amazed at how wonderful it is and wonder why no one has told you about this incredible cake before. This recipe came from a pastry chef friend of mine, and I adapted it slightly, 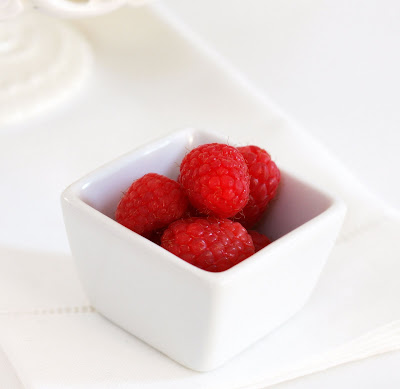 adding lemon zest and vanilla and scaling down the amount of batter to fit in an 8-inch springform pan. Though I chose fresh raspberries, you can top this cheesecake with any berry or fruit, such as strawberries, blueberries, blackberries or peaches. It would work very nicely with caramelized apples, I think.
To donate to the Red Cross’s earthquake relief effort in Japan, click here.
Japanese-style Cheesecake with Fresh Raspberries

Makes one 8-inch cake, serving 6-8 (or 1, if it’s me)
Japanese-style Cheesecake:
5.3 oz (150 gr) cream cheese, cut into chunks
¼ cup (60 gr) milk
4 large egg yolks
½ cup plus 1 tablespoon (120 gr) granulated sugar, divided
1 teaspoon finely grated lemon zest
1 teaspoon vanilla extract
1 tablespoon plus 1 teaspoon (10 gr) cornstarch
¼ cup plus ½ tablespoon (32 gr) cake flour
4 large egg whites
Topping:
About 8 ounces fresh raspberries
Strawberry jelly
1. Butter the bottom and sides of an 8-inch springform pan. Line the bottom of the pan with a round of parchment paper, cut to fit, and butter the parchment paper. Wrap the pan with heavy-duty aluminum foil, pressing it up the sides. Preheat the oven to 300°F.
2. Place the cream cheese and milk in a stainless steel bowl over a pot of simmering water and whisk until smooth. Remove the bowl from over the pot and allow to cool.
2. In the bowl of an electric mixer fitted with the paddle attachment, beat the egg yolks with half (60 gr/1/4 cup plus 1 1/2 tsp) of the sugar until well blended and light. Add the cream cheese mixture, lemon zest and vanilla and mix until combined. Add the cornstarch and flour and mix until blended.
3. In the bowl of an electric mixer fitted with the whisk attachment, whip the egg whites to soft peaks. Gradually add the remaining 60 gr (4.2 oz/1/4 cup plus 1 1/2 tsp) sugar and whip until stiff and glossy. Fold one-third of the whipped whites into the cream cheese batter, then fold in the remaining whites. Scrape the mixture into the prepared pan. Place the pan in a roasting pan and pour very hot water into the pan, letting it come about one inch up the sides of the pan. Bake at 300°F, covered loosely with a piece of buttered foil (buttered side down) for 20 minutes. Remove the foil cover and bake for another 30 to 35 minutes, until the cake is golden brown and set. Turn the oven off, prop the door open with a wooden spoon, and let the cake cool in the oven for 1 hour.
4. Remove the cake pan from the water, then unwrap the foil and let the cake cool on a wire rack for 20 minutes.
5. Run a sharp knife around the edge of the pan and carefully remove the side of the springform pan. Carefully invert the cake onto a serving plate (the browned top will now be on the bottom).
6. Cover the top of the cake with fresh raspberries, pointed end up. Place some strawberry jelly in a small cup and microwave on HIGH until melted, about 30 seconds. Brush the melted jelly over the raspberries. Serve the cake with sweetened whipped cream.
Posted by Tish Boyle at 9:41 AM