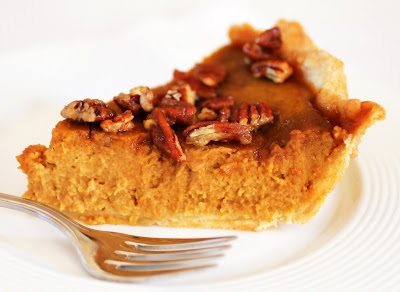 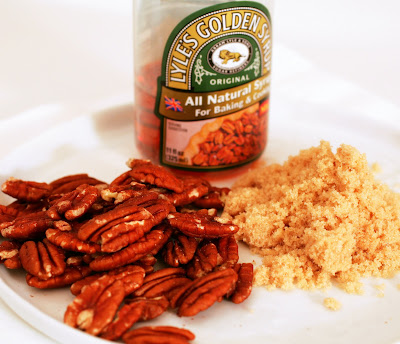 more, the merrier, I say. When I am cooking for Thanksgiving, I always offer a selection of several different pie varieties. But cooking Thanksgiving dinner can be fairly stressful, so I am offering a 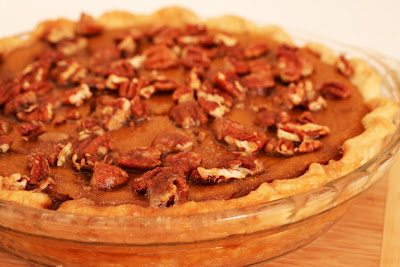 solution for the time-consuming multi-variety pie predicament: Deep-Dish Pumpkin-Peca Pie. With it, you get the creamy traditional pumpkin filling and just enough sweet, crunchy pecan 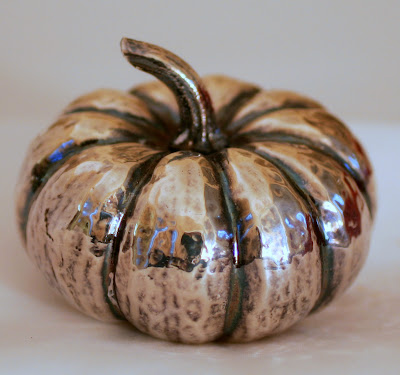 topping to satisfy your pecan pie urge. The crust, possibly the most important part of a pie, is made with just enough shortening to make it flaky, and enough butter to give it a rich flavor, a happy 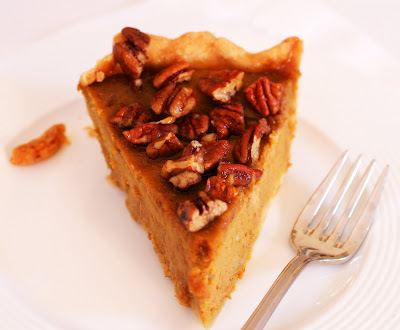 compromise. The filling is a standard pumpkin pie filling, and since the pie is made in a deep-dish pan, there’s plenty of it. The topping is a simple mixture of pecans, brown sugar, Lyle’s Golden Syrup and vanilla, and bakes up into thin layer of sticky deliciousness. I might just eat this whole pie…
Deep-Dish Pumpkin-Pecan Pie

Makes one 9-inch deep-dish pie, serving 8
Classic Flaky Pie Crust:
2 1/2 cups (300 g) all-purpose flour
1 tablespoon granulated sugar
1 teaspoon salt
9 tablespoons unsalted butter, cut into ½-inch chunks and frozen
½ cup vegetable shortening, frozen
6 to 8 tablespoons ice-cold water
Pumpkin Filling:
2 cups (500 g) unsweetened canned pumpkin puree (Libby's is best)
1 1/4 cups heavy cream
3/4 cup firmly packed brown sugar
1 tablespoon all-purpose flour
2 teaspoons vanilla extract
1/2 teaspoon salt
1 1/2 teaspoons ground cinnamon
1/4 teaspoon ground ginger
1/4 teaspoon ground nutmeg
1/4 teaspoon ground allspice
3 eggs, lightly beaten
2 tablespoons finely chopped crystallized ginger
Pecan Praline Topping:
1/2 cup coarsely chopped pecans
1/4 cup firmly packed brown sugar
1 tablespoon Lyle’s Golden syrup or light or dark corn syrup
½ teaspoon vanilla extract
Make the dough for the crust:
1. Place the flour and salt in a food processor fitted with the metal chopping blade and pulse on and off until combined. Scatter the butter pieces and the shortening, in large chunks, over the flour mixture. Pulse the machine on and off until the mixture resembles coarse meal. Add 6 tablespoons of the ice water and process until the mixture just starts to come together. (If the dough seems dry, add the remaining 2 tablespoons water as necessary. Do not allow the dough to form a ball on the blade, or the resulting crust will be tough!)
2. Turn the dough out onto a work surface, divide it in half, and shape each half into a thick disk. Wrap the disks separately in plastic wrap and chill for at least 2 hours. (You will only need one disk for this recipe, so you can freeze the other disk for later use.)
Roll out the crust:
3. Lightly flour a large work surface. Allow the dough to soften at room temperature just until it is pliable (about 20 minutes). Place 1 disk on the floured surface and sprinkle some flour over it. Roll the dough from the center out in every direction, flouring the work surface as necessary to prevent sticking. You want a round about 1/8 inch or slightly less thick and about 3 inches greater in diameter than the pie pan you are using.
4. Transfer the crust to a 9-inch deep-dish pie pan (if you don’t use a deep-dish pan, there will be some filling left over) by rolling it loosely around the rolling pin and unrolling it carefully over the pan. Press the dough first into the bottom of the pan and then against the sides. Patch any holes or cracks with dough scraps. Trim the edges of the dough with scissors, leaving about 3/4 inch of overhang.
Par-bake the pie crust
5. Preheat the oven to 400°F. Line the pie crust with a large sheet of lightly buttered aluminum foil, buttered side down, covering the edge of the crust so that it doesn't get too brown. Fill the lined crust with pie weights, dried beans, or raw rice. Bake the pie crust for 15 minutes. Remove the weights and foil. Prick the bottom of the crust well with a fork and bake the crust for another 7 minutes, or until the edges are just beginning to turn golden, but the crust is not fully baked. Cool the pie crust on a wire rack while you make the filling. Reduce the oven temperature to 325°F.
Make the filling:
6. Whisk together the pumpkin, cream, sugar, flour, vanilla, salt and spices until smooth. Whisk in the eggs until well blended. Sprinkle the crystallized ginger over the bottom of the par-baked crust. Pour the filling into prepared crust and bake at 325° for 55 minutes, until the filling is almost, but not quite, set in the center.
Make the topping:
7. Combine the pecans, brown sugar, syrup, and vanilla, and stir well. Sprinkle pecan mixture over pie, and bake an additional 10 to 15 minutes or until filling is set. Let cool completely on a wire rack.
Posted by Tish Boyle at 12:58 PM