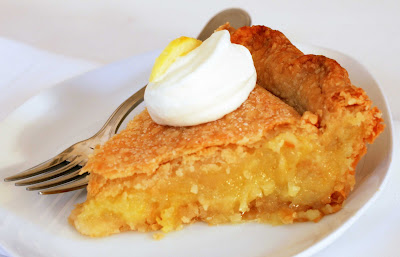 I know it’s predictable and perhaps a little boring, but the fact is that The Joy of Cooking – the 1997 version, that is – is one of my favorite and most used cookbooks. You can find just about everything in it, the recipes always work (though there are a few 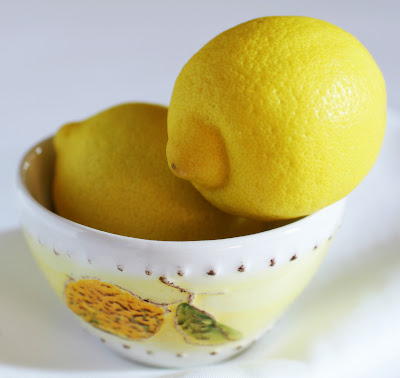 typos here and there) and they are generally very good. Many of my good friends worked on this book, either contributing recipes or performing the mammoth task of copyediting it (kudos to copyediting genius Judith Sutton). One of my interns even worked 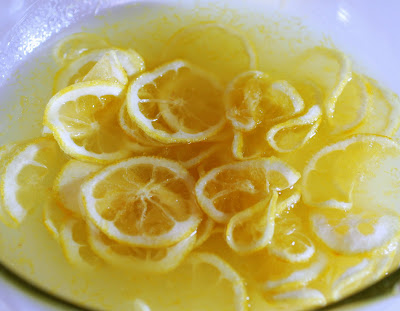 on the book after leaving my dysfunctional nest at Chocolatier. Though there are plenty of good international recipes in The Joy, I find the American classics to be the best. Among them is the classic Ohio Lemon Pie, a.k.a. Shaker Lemon Pie. The Shakers are known 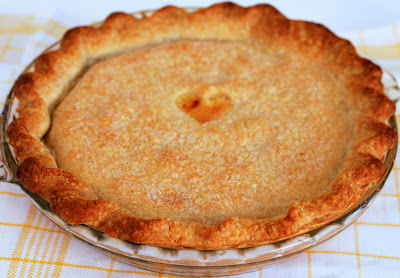 for their wonderful pies (and furniture). Back in the day, lemons were considered to be a valuable commodity, so those thrifty Shakers figured out how to use the whole fruit in a pie. I love the frugality of this, and it reminds me of one of my favorite French 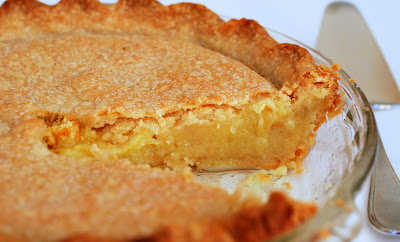 desserts, Pradier’s Whole Lemon Tart, which he made for my cooking class during a demo one day, many years ago in Paris. But in Pradier’s version, the lemons are chucked whole, seeds and all,  into the food processor and transformed to a puree. In the Shaker pie, they are sliced thinly and macerated in sugar. Like Pradier’s tart, the Shaker Lemon Pie is not for the feint of heart. It’s got a serious lemon kick, which is why lemon fanatics love it so. Encased in a flaky-yet-buttery crust (my own recipe), this pie is downright irresistible. And you don’t have to be a Shaker from Ohio, either, to love it.
Ohio Shaker Lemon Pie (adapted from The Joy of Cooking)

Makes one tangy 9-inch pie
Lemon Pie Filling:
2 large lemons
2 cups (400 g) granulated sugar
¼ teaspoon salt
4 large eggs
4 tablespoons unsalted butter, melted
3 tablespoons (22 g) all-purpose flour
Classic Flaky Pie Crust:
2 1/2 cups (300 g) all-purpose flour
1 tablespoon granulated sugar
3/4 teaspoon salt
10 tablespoons unsalted butter, cut into ½-inch chunks and frozen
½ cup vegetable shortening, frozen
6 to 8 tablespoons ice-cold water
Coarse sugar, for sprinkling
Make the filling:
1. Remove the zest from the lemons and set it aside. Using a mandoline or Benriner (or, if you have the patience of a saint, a sharp knife), slice the zested lemons paper-thin, removing any seeds. In a bowl, combine the lemon slices with the zest, sugar and salt. Cover and let stand at room temperature for at least 2, and up to 24, hours.
Make the dough for the crust:
2. Place the flour and salt in a food processor fitted with the metal chopping blade and pulse on and off until combined. Scatter the butter pieces and the shortening, in large chunks, over the flour mixture. Pulse the machine on and off until the mixture resembles coarse meal. Add 6 tablespoons of the ice water and process until the mixture just starts to come together. (If the dough seems dry, add the remaining 2 tablespoons water as necessary. Do not allow the dough to form a ball on the blade, or the resulting crust will be tough!)
3. Turn the dough out onto a work surface, divide it in half, and shape each half into a thick disk. Wrap the disks separately in plastic wrap and chill for at least 2 hours.
Roll out the crust:
4. Lightly flour a large work surface. Allow the dough to soften at room temperature just until it is pliable (about 20 minutes). Place 1 disk on the floured surface and sprinkle some flour over it. Roll the dough from the center out in every direction, flouring the work surface as necessary to prevent sticking. You want a round about 1/8 inch or slightly less thick and about 3 inches greater in diameter than the pie pan you are using.
5. Transfer the crust to a 9-inch pie pan by rolling it loosely around the rolling pin and unrolling it carefully over the pan. Press the dough first into the bottom of the pan and then against the sides. Patch any holes or cracks with dough scraps. Trim the edges of the dough with scissors, leaving about 3/4 inch of overhang. Roll out the second disk in the same manner and place it on a baking sheet. Cut some decorative holes out of the crust using small cutters, if you like. (Otherwise you can vent it with a paring knife later.) Chill the crust for at least 30 minutes or up to 24 hours.
Continue making the filling:
6. Position a rack in the lower third of the oven and preheat the oven to 425°F. In a large bowl, whisk the eggs until frothy. Whisk in the melted butter and flour. Stir in the lemon mixture. Pour the filling into the pie crust, leveling it with a spoon. Drape the chilled top crust over the filling and trim it to allow a 3/4-inch overhang. Press the edges of the two crusts together to seal them. Tuck the dough underneath itself, pressing it onto the rim of the pan. Flute the edge. Use a paring knife to vent the top crust, if you haven’t made any cutouts in it, and sprinkle with some coarse sugar. Bake the pie for 30 minutes. Reduce the oven temperature to 350°F and bake until a knife inserted into the center comes out clean, 20 to 30 minutes more. Let cool completely on a rack. The pie can be refrigerated for up to 2 days, but it should be served at room temperature.
Posted by Tish Boyle at 4:41 PM