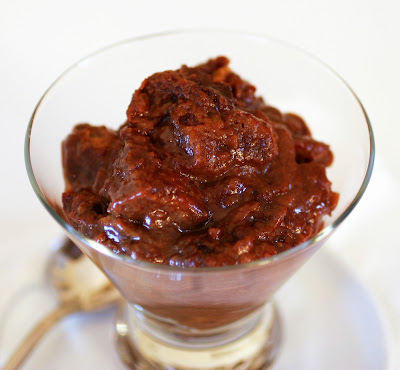 Though it might insult my Italian friends to say it, I’ve never been a huge fan of panettone, the sweet yeast bread from Milan that's so popular at Christmastime. It might have something to do with a press trip to Italy I went on years ago that was filled with endless 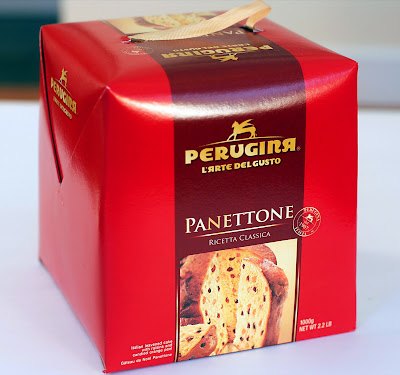 tours of panettone and biscotti factories. The low point of the trip was a long presentation in a stifling room by an executive from one of the largest panettone producers. His English was not perfect (though admittedly far superior to my Italian), and he repeatedly 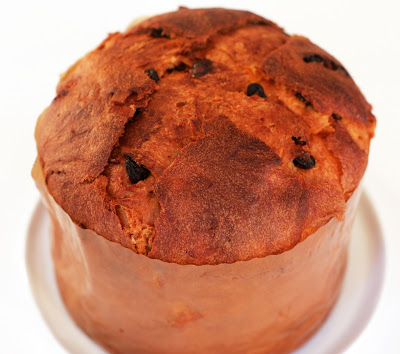 pronounced the word “dough” like “dog” throughout his speech. One of my co-workers actually nodded off during the presentation, letting out a loud snort as he jerked himself back into consciousness. I still giggle at the memory. But back to the

panettone. Though I love its subtle orange flavor and richness, I find it a bit dry. It’s not bad when dunked into coffee, but I’ve found a better alternative: using it as the base for a rich chocolate bread pudding. Originally conceived as a frugal way of using leftover or 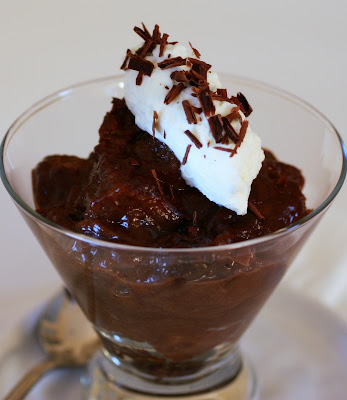 stale bread, bread pudding has since evolved into a sophisticated dessert. The basic bread pudding recipe calls for sliced or cubed bread, milk and/or cream, eggs and sugar. But I’ve gilded the lily by using panettone in place of plain bread, and added some melted 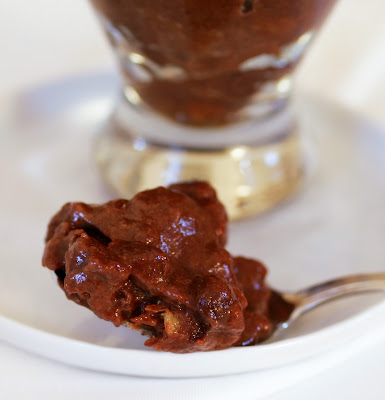 bittersweet chocolate to make a rich and very chocolaty version. If you’re a panettone purist, you’ll no doubt be rolling your eyes in horror after reading this post, but if you’re like me, you’ll be happy you found a great reason to go out and buy your own panettone. Ciao!

1. Position a rack in the center of the oven and preheat the oven to 200°F. Generously butter the bottom and sides of a 2-quart casserole or baking dish.
2. Scatter the panettone cubes on a baking sheet and bake for 25 minutes, until lightly golden and dried. Set aside to cool.
3. Place the chocolate in a medium stainless steel bowl and set the bowl on top of a pot of barely simmering water. Heat, stirring frequently, until melted. Remove from heat and set aside.
4. In a saucepan, combine the half-and-half and sugars and bring to a gently boil, stirring to dissolve the sugar. Remove the pan from the heat.
5. In a large bowl, whisk together the egg yolks, cinnamon and vanilla extract until combined. Gradually add the hot half-and-half mixture, whisking until smooth. Whisk in the warm melted chocolate. Gently stir in the panettone cubes, making sure they are completely coated. Set aside for about 30 minutes, stirring occasionally.
6. Preheat oven to 375°F. Pour the panettone mixture into the prepared baking dish and cover the dish with a piece of foil, tenting the foil so that it doesn’t rest on the surface of the pudding. Place the baking dish into a larger roasting pan, and pour hot water into the roasting pan so that it comes halfway up the sides of the baking dish. Bake the pudding for about 45 minutes, or until set in the center. Let stand at room temperature for 10 minutes before serving.
7. Serve the pudding warm with softly whipped cream.
Posted by Tish Boyle at 5:42 PM