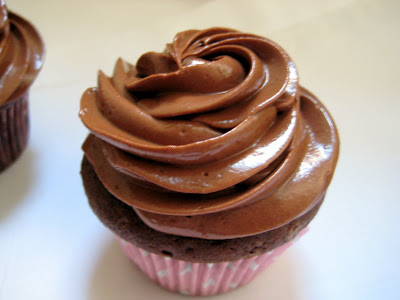 When I became editor of Chocolatier magazine back in 1992 (was it really that long ago?), no one ever talked about the cocoa percentages of chocolate. Your choices were white, milk, semisweet or bittersweet, and you had to rely on brand recognition to figure out just what you were buying and how sweet it was. Thankfully, times have changed, and the American consumer has become much more sophisticated about buying chocolate. Chocolate manufacturers, in turn, are giving us much more information about their products than ever before. High quality bittersweet chocolate has become almost as popular as cupcakes are these days, so I thought it would be a good idea to combine the two. This chocolate cupcake base is made with Dutch-processed cocoa powder and a good amount of sour cream and butter, which makes a moist, fudgy cake with a tender crumb. The frosting has the look of a ganache, but it's actually a simple French-style egg yolk buttercream which has 10 ounces of melted bittersweet chocolate added to it. I used E. Guittard 62 percent bittersweet chocolate, one of my favorites. This recipe can also be made as a cake, with two 9-inch layers.

Chocolate Fudge Cupcakes:
1 3/4 cups all-purpose flour
1 cup alkalized cocoa powder
1 1/4 teaspoons baking soda
1/4 teaspoon salt
3/4 cup (1 1/2 sticks) unsalted butter, softened
1 1/2 cups granulated sugar
2 large eggs
2 teaspoons vanilla extract
1 1/2 cups sour cream
Silky Chocolate Buttercream:
10 ounces bittersweet chocolate, chopped
2/3 cup water, divided
3/4 cup granulated sugar
3 large egg yolks
1 cup (2 sticks) unsalted butter, slightly softened
Make the cupcakes:
1. Position rack in center of oven and preheat oven to 350°F. Line two 12-cupcake pans with paper cupcake cups.
2. In a medium bowl, sift together flour, cocoa powder, baking soda and salt. Whisk to blend and set aside.
3. In the bowl of an electric mixer, using the paddle attachment, beat the butter on medium-high speed until creamy, about 30 seconds. Gradually add the sugar and beat at high speed until light, about 3 minutes. Reduce the speed to medium and add the eggs, one at a time, mixing well after each addition and scraping down the sides of the bowl as necessary. Mix in the vanilla extract. Reduce the speed to low and add the dry ingredients in three additions, alternating them with the sour cream in two additions and mixing just until blended. Divide the batter among the cupcake cups and bake for 20 to 25 minutes, until a toothpick inserted into center of a cupcake comes out clean. Cool cupcakes in pans set on wire racks for 15 minutes. Remove cupcakes to racks and cool completely.
Make the buttercream:
4. Put the chocolate and 1/3 cup of the water in a medium stainless steel bowl and place the bowl over a pot of barely simmering water. Heat, stirring frequently, until the chocolate is completely melted. Remove the bowl from over the pot and set the chocolate mixture aside to cool until tepid.
5. In small, heavy saucepan, combine the sugar with the remaining 1/3 water. Place the pan over medium-high heat and cook, stirring constantly, just until the sugar is dissolved. Stop stirring, and increase the heat to high.
6. . Meanwhile, in the bowl of an electric mixer fitted with the whisk attachment, begin beating the egg yolks at medium speed while the syrup cooks to the correct temperature. When the sugar syrup reaches 225°F on a candy thermometer, increase the speed of the mixer to high. Continue to cook the sugar syrup until it reaches 238°F on a candy thermometer. Remove the pan from the heat and with the mixer off, immediately pour about 1/4 cup of the hot syrup over the beaten eggs. Beat at high speed until blended, about 10 seconds. Turn the mixer off and add another 1/4 cup syrup. Beat at high speed for another 10 seconds. Repeat this process until all of the syrup is used. Using a rubber spatula, scrape down the side of the bowl and continue to beat at medium-high speed until the egg mixture is completely cool, about 5 minutes.
7. At medium speed, beat the softened butter, 1 tablespoon at a time, into the egg mixture. Increase the speed to medium-high and beat the buttercream until it is smooth and shiny, about 2 minutes. Reduce the speed to low and add the cooled chocolate mixture, mixing just until blended. Stir the mixture by hand a few times to make sure it is well blended. Use thebuttercream at room temperature.
Frost the cupcakes:
8. Fill a pastry bag fitted with a medium star tip (Ateco #6) with the buttercream. Pipe a generous swirl of buttercream onto each cupcake.
Posted by Tish Boyle at 6:56 PM