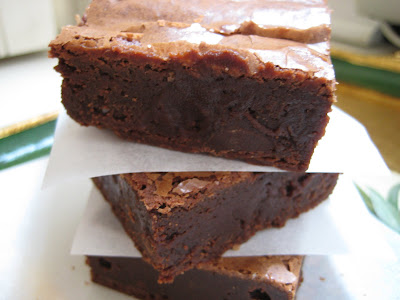 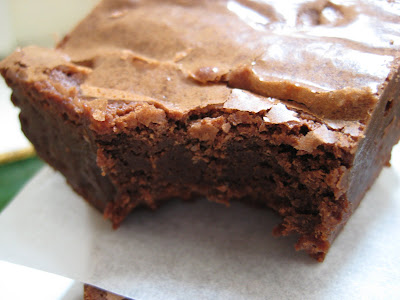 I made these incredibly fudgy brownies from a recipe in Sweet Gratitude (Artisan, 2005) by my good friend Judith Sutton. Judith calls them Very Special Fudgy Brownies, and she prefers to use Sharffen Berger 70 percent cacao bittersweet chocolate as the star ingredient. The brownie batter is made with melted unsweetened and bittersweet chocolate, to which shards of bittersweet chocolate are added. The shards, as Judith puts it, "provide unexpected bursts of deep chocolate flavor. While the chocolate melts as the brownies bake, it doesn't dissolve into the batter, and if the brownies are not chilled (other than briefly, for easier cutting), the chocolate stays soft, almost gooey..." If you chill the brownies, they'll have a candy-like texture, and the chunks of chocolate will remain firm. Either way, they are far and away the best brownies I've ever had. I'm sure you'll agree.

1. Put a rack in the middle of the oven and preheat the oven to 350 degrees F. Line a 9-by-13-inch baking pan with foil, leaving an overhang on the narrow ends.
2. Combine the butter, unsweetened chocolate and 2 ounces bittersweet chocolate in a medium, heavy saucepan and melt over low heat, stirring frequently until smooth. Remove from the heat.
3. In a large bowl, beat the eggs and both sugars with an electric mixer on low speed just until smooth. Beat in the salt. Beat in the melted chocolate mixture, then beat in the vanilla. Scrape down the sides of the bowl. Beat in the flour in two additions (the batter will be thick). Stir in the 7 ounces chocolate.
4. Scrape the batter into the prepared pan and smooth the top. Bake for 23 to 25 minutes, or until the top is set but still soft and the edges are puffed and just beginning to pull away from the sides of the pan. A toothpick inserted in the center will come out still gooey (be brave!--underbaking the brownies is one of the secrets to their fudgy texture). Transfer the pan to a wire rack to cool completely.
5. For the neatest cuts, refrigerate the pan for about 20 minutes before cutting the brownies. Using the foil, lift the brownie slab out of the pan. Carefully peel off the foil and put the brownie on a large cutting board. With a large sharp knife, cut the brownies into 48 squares. (The brownies can be stored in an airtight container at room temperature for up to 3 days; they can also be frozen, well wrapped, for up to 2 weeks.)

More about Judith Sutton and why we're friends:
Judith and I met at La Varenne cooking school in Paris in 1986. We were in the same small class and cooked together for nine extraordinary months. After meeting, we soon learned that we had both gone to the same small liberal arts school, Smith College in Northampton, MA. What were the odds on that? After our time in Paris, we both returned to New York, where we cooked in different restaurants. Judith went on to become the greatest cookbook editor of all time, and today she is much sought after by authors and publishers to work on their most important cookbooks (i.e., The Joy of Cooking, The Gourmet Cookbook, The French Laundry Cookbook, etc.). Judith is also a celebrated food writer. She also happens to be one of the nicest people I know, and remains one of my very best friends. Thanks, Judith, for being you. And thanks for the brownie recipe, too.